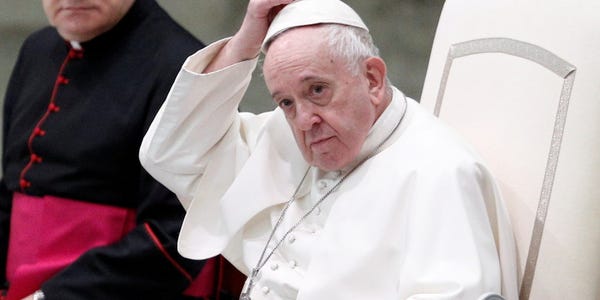 The Vatican has said that Pope Francis' comments supporting same-sex civil unions were taken out of context.

The Pope had made the comment in a previously unseen 2019 interview with Mexico's Televisa that was featured in "Francesco," a documentary about his life and ministry that debuted in Rome in October, in which he said: "Homosexuals have a right to be a part of the family."

"What we have to create is a civil union law. That way they are legally covered," Pope Francis said of same-sex couples having civil unions. "I stood up for that."

The Catholic community has historically been opposed to same-sex marriage, and his comments were met with mixed reactions among people in the religion.

The Vatican's Secretariat of State sent a letter to papal representatives around the world on October 30 saying two comments from the documentary, made by Russian-born director Evgeny Agineevsky, needed to be clarified.

"More than a year ago, during an interview, Pope Francis answered two different questions at two different times that, in the aforementioned documentary, were edited and published as a single answer without the proper contextualization, which has led to confusion," the letter, seen by CNN, said.

The Vatican went on to say the pope meant that there needs to be a "civil union law" as opposed to same-sex marriage and that the pope was speaking about his opposition to a same-sex law in Argentina in 2010 when he made the 2019 comments.

"It is clear that Pope Francis was referring to certain provisions made by states, and certainly not to the doctrine of the Church, which he has reaffirmed numerous times over the years," the letter said, according to CNN.

The letter also said that the line "it is an incongruence to speak of homosexual marriage" was left out of the pope's comments.

In responding to the pope's comment that "homosexuals have a right to be part of the family," the Vatican disputed suggestions that he meant same-sex couples should have families.

The letter said that the pope was instead saying, "a son or daughter with a homosexual orientation should never be discriminated against within the family."

Pope Francis has previously spoken out in support of the LGBTQ community, saying people should not be discriminated against and that the Catholic Church should apologize for doing so.