Singapore: Terrified of bombs dropping from the sky, the villagers from Ei Tu Hta on the border of Thailand did not want to cross back into Myanmar but had no choice.

“As they were getting on the boats to cross to the other side they received a message that the jet fighters were on their way again,” Naw Wah Khu Shee, the director of Karen Peace Support Network, a civilian group in Myanmar’s southeastern borderlands, told The Sydney Morning Herald and The Age. 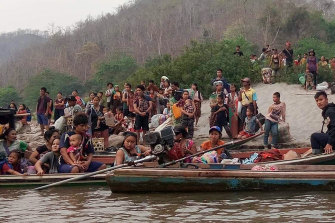 People on the banks of the Salween river crossed into Thailand but were turned back.Credit: EI TU HTA COMMUNITY LEADERS / AFP

“They feel scared, they feel frightened. We don’t know if there will be another attack or not so since they have no other choice they’ve started digging bunkers.”

As the atrocities mount in the Myanmar military’s murderous crackdown against the pro-democracy movement, with more than 500 people now killed in the chaos of the past two months, the nation is threatening to descend into civil war.

Three of Myanmar’s ethnic armed organisations, which control large swathes of the country, on Tuesday threatened to enter the conflict and “fight alongside the people” if the junta continued to attack protesters, with security forces firing into funerals, bodies being burnt and dozens of children losing their lives.

The groups – the Myanmar National Democratic Alliance Army, the Arakan Army and Ta’ang National Liberation Army – made the statement a day after one of the main protest organisers, the General Strike Committee of Nationalities, appealed to the country’s many ethnic militias to join in the struggle against the new regime.

There have already been clashes near the Thai border between one of the most established minority armed forces, the Karen National Union, and the military, which on the weekend launched the first air strikes in the region in 25 years, claiming at least three lives.

The air assault induced between 2000 to 3000 people from a refugee camp on the Myanmar side of the border to cross the Salween river and seek refuge in the Thai province of Mae Hong Son.

However, they returned on Monday night amid conflicting messages from Thai officials about whether or not they were welcome and had been turned around.

Thai Prime Minister Prayuth Chan-ocha had said on Monday the country would accept the refugees – “We don’t want to have an exodus into our territory, but we have to take care of human rights, too,” he said – but other local officials said they should be not be allowed to cross the border.

Sunai Phasuk, Human Rights Watch’s senior researcher on Thailand, described the pushback as “heartless” and “illegal” while the Burma Campaign UK activist group said it was “shocked to see the Thai’s army forcing refugees back to Burma where attacks by Burmese military continues”.

Khu Shee said there had been “indirect pressure” on the refugees to cross back over the border in the day after they arrived.

“There was no shelter and they were put in a place where there was no water, and the weather is really hot,” she said.

“So it’s really hard for the kids and the sick and the elderly. The children were asking for food and asking for water, they were crying. Normally we would respond to those humanitarian needs but for this group we unable to access them – the army has not allowed anyone to reach them from the Thai side.”

It is not the first attempted exodus from Myanmar since the February 1 coup. Hundreds including policemen have also fled to India’s Mizoram state but that border has since been sealed and the Myanmar military has asked India to send them back.

The pressure on Myanmar’s borders has signalled the elevation of the bloody crackdown into a regional humanitarian crisis.

“There are a lot of people who have gone from the Bamar area in central Myanmar into the ethnic minority areas and the ethnic minorities have said they will provide protection. But there is also increased military activity in those areas. People are fleeing as a result and this has consequences not only for Myanmar’s neighbours but for everybody else as well.”