'This is just half of me': Adele flaunts weight loss on SNL

‘This is just half of me’: Adele flaunts her incredible weight loss on SNL and thanks Sarah Palin for propelling her to stardom in America when she appeared alongside her in 2008 looking ‘very different’

Adele has hosted Saturday Night Live for the first time, joking that she brought ‘half of me’, as a result of her massive weight loss.

She immediately referenced her radically different appearance, saying: ‘I know I look different than when you last saw me, but because of the COVID restrictions I had to travel light and bring only half with me, so this is the half I chose.’

In January, the singer told a fan during a vacation in Anguilla that she lost ‘something like 100 pounds.’ 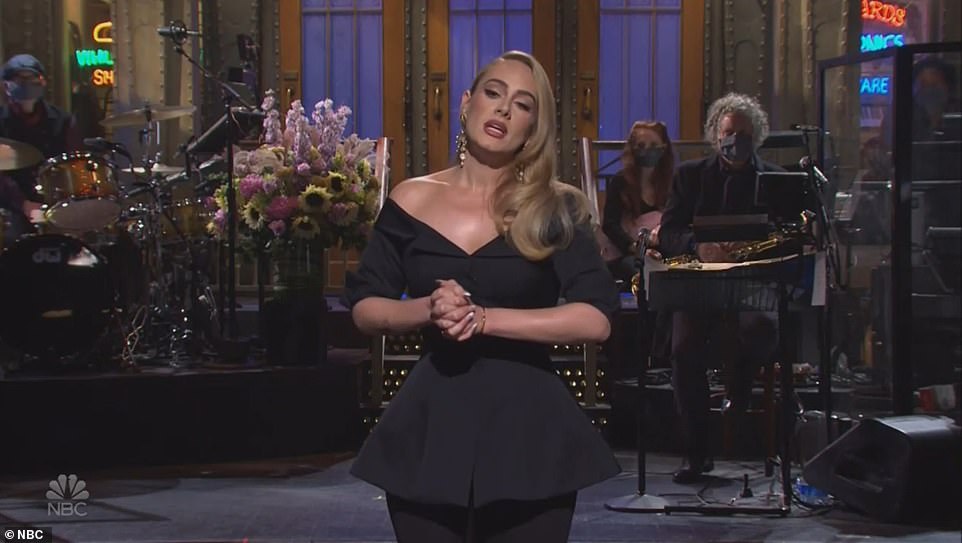 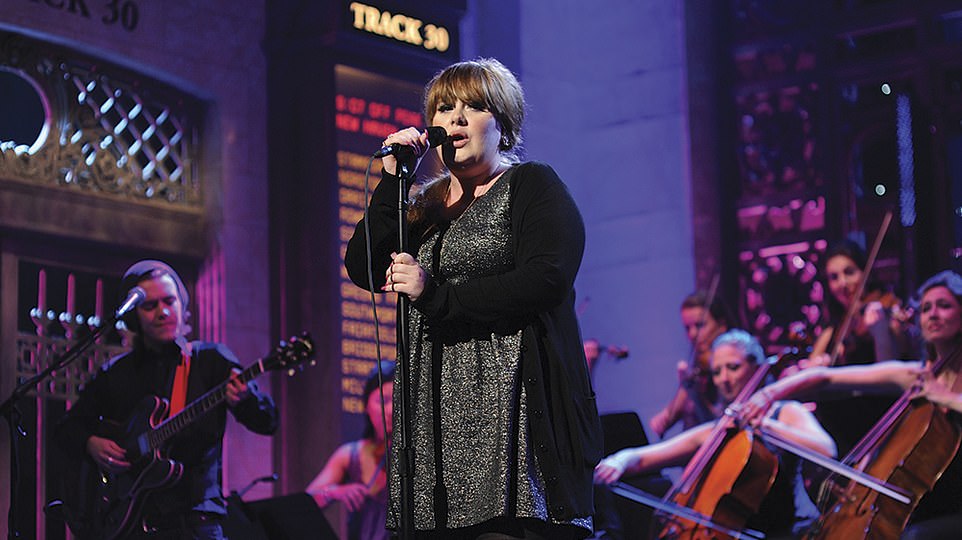 The singer was last on the show in 2008: ‘I know I look different than when you last saw me,’ she said on Saturday night 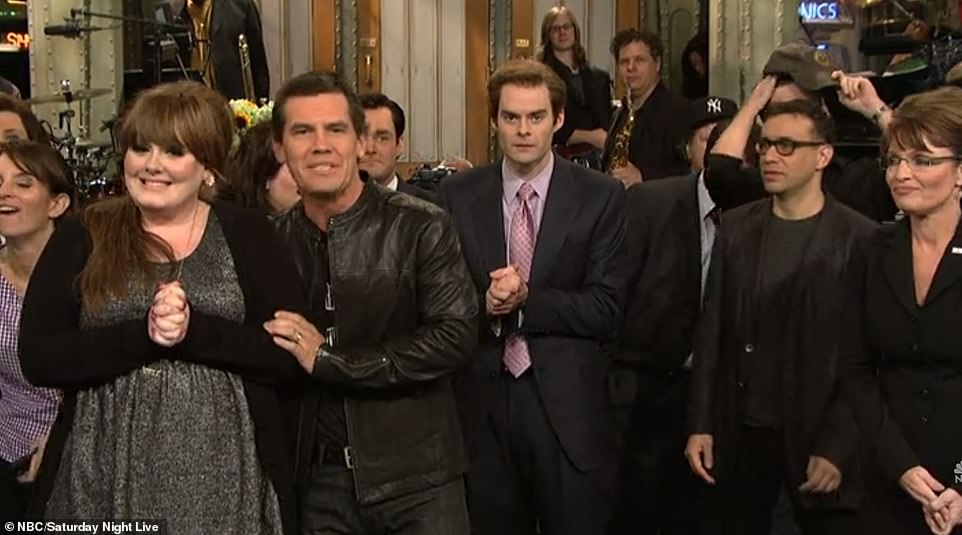 Adele was on the show in 2008 with Josh Brolin, pictured next to her, and Sarah Palin (far right) 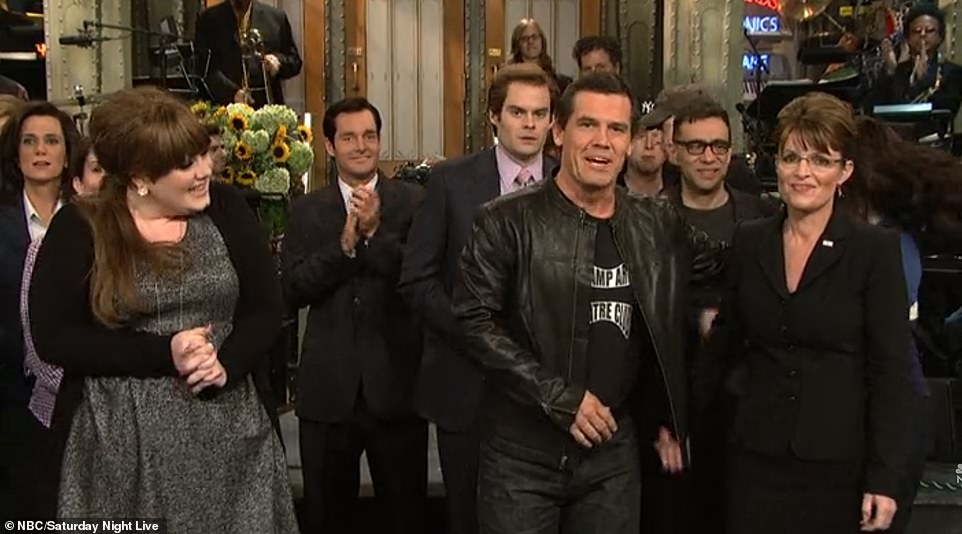 Palin (far right) was running for the vice presidency as John McCain’s running mate in 2008, when she appeared on SNL 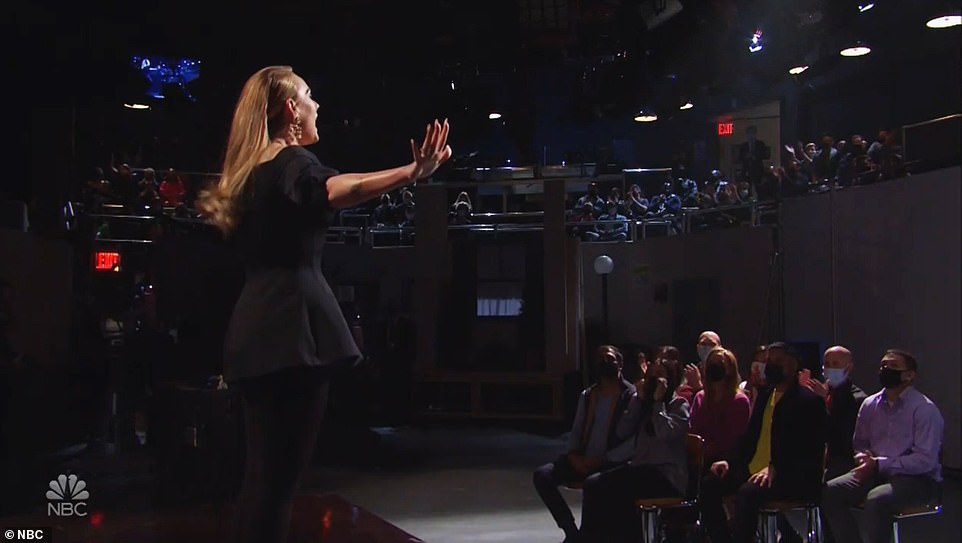 The London-born singer said she was ‘thrilled’ to be hosting the show, and said she was a huge fan of the series 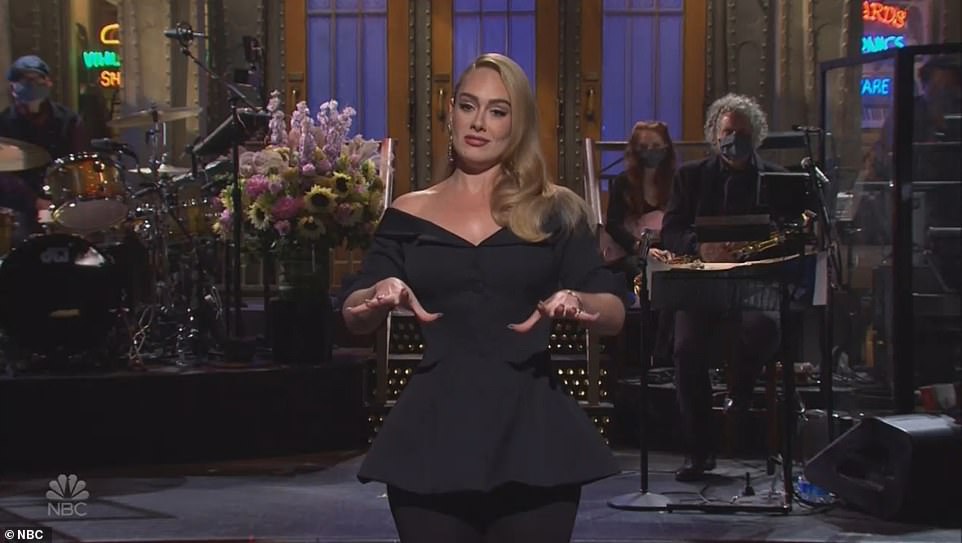 The 32-year-old British singer thanked Sarah Palin for boosting her career in 2008: the pair appeared on the same episode 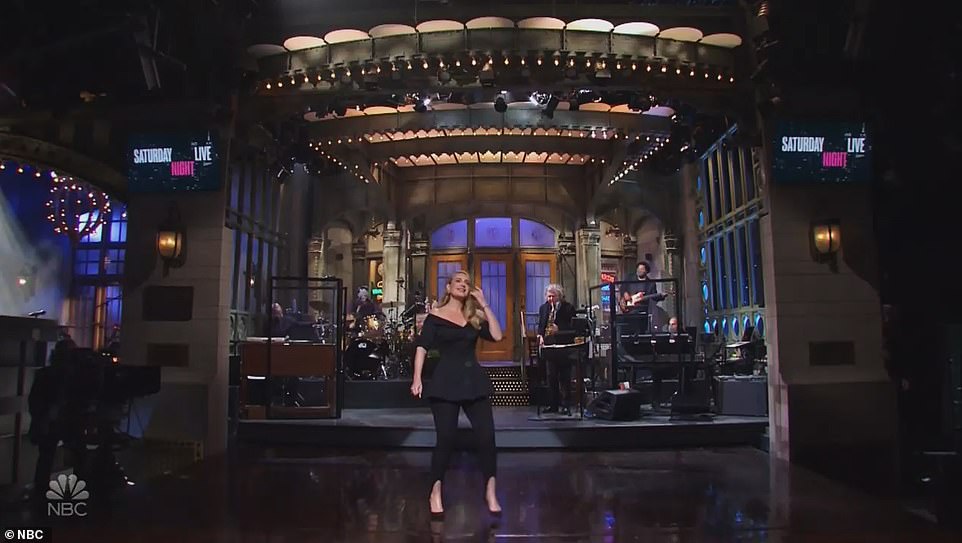 Adele has not released an album since 2015 but said that she was working on new music, although it is not yet ready

‘There is no miracle exercise that can make you look like you lost a lot of weight.’

Adele was last on SNL in 2008, in an episode hosted by Josh Brolin.

At the time she had just released her first album, 19.

‘It’s me, Adele, and my God, I’m absolutely thrilled to finally be hosting this show,’ she said.

‘A show that not only do I genuinely love, but the show that broke my career here in America 12 very long years ago.

‘See, I was a musical guest back in 2008 when Sarah Palin came on with Ms Tina Fey.

‘So obviously a few million people tuned in to watch it and the rest is history.

‘Now, I don’t know anything about American politics. I’m British, you know? And I don’t want to say anything too political, so I’ll just say this: Sarah Palin, babes, thanks for everything, yeah?’

She also joked about her British habit of swearing, gesturing to a swear jar. 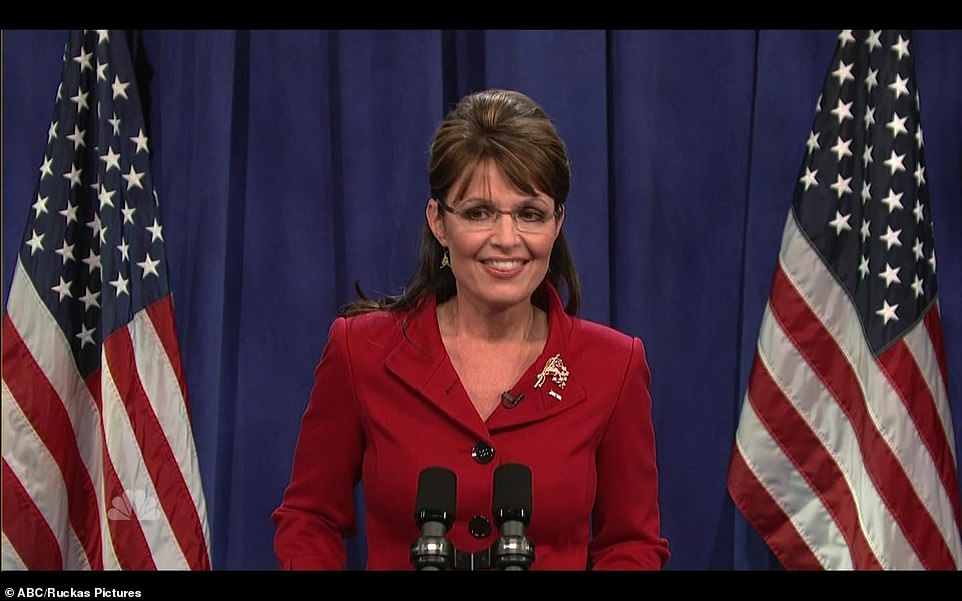 Sarah Palin, at the time the vice presidential nominee, appeared on the 2008 show with Adele 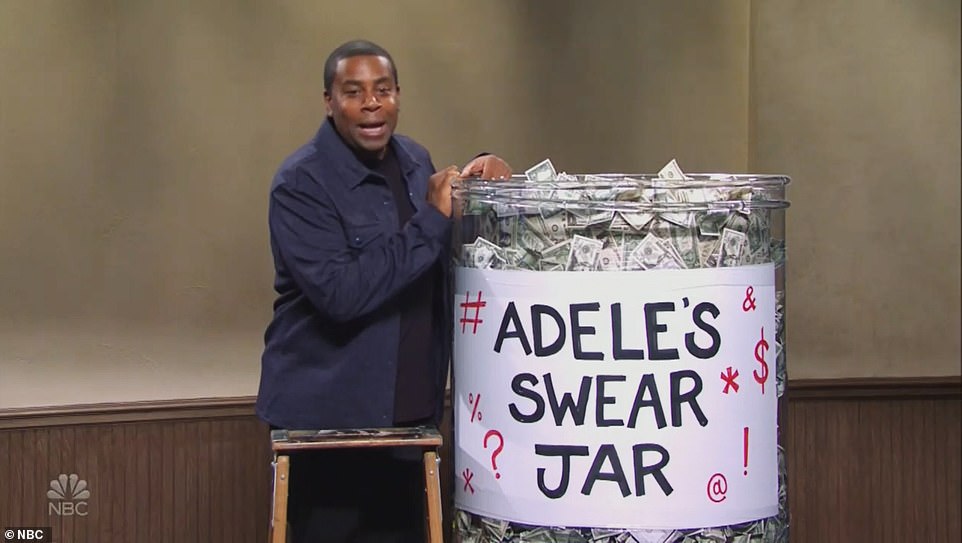 Adele’s swear jar, jokingly said to be just from her dressing room, was full of cash she said should go to charity 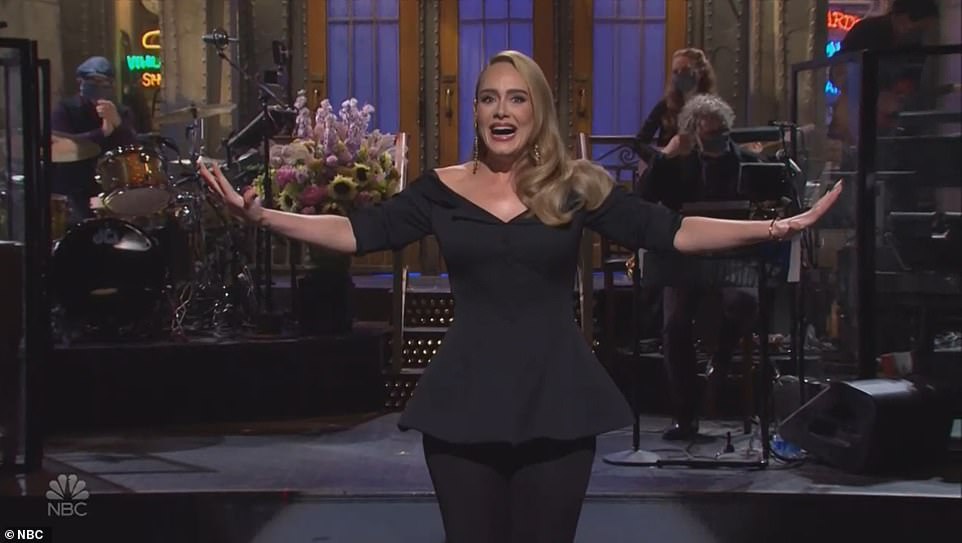 Adele said she didn’t want to be the musical act, and instead wanted to ‘have a glass of wine or six and see what happens’

‘I’m nervous. You know what I’m like. I always get very nervous on live TV but tonight especially so because I swear a lot. Like a lot a lot,’ she said.

‘Honestly I don’t notice I’m doing it anymore. But tonight, we’ve got a swear jar. Let’s check in on that. Let’s make sure that all goes to charity.’

She said she didn’t want to be the musical act because her album was not finished and she would rather ‘have a glass of wine or six and see what happens’.

The 32-year-old London-born singer last released new music in 2015, with her third and final album, 25.

In 2016 she headlined Glastonbury, but has kept a low profile for the past few years, leaving fans clamoring for more music from her.

In one skit on Saturday, Adele played a contestant on The Bachelor, breaking into song and irritating the other contestants. 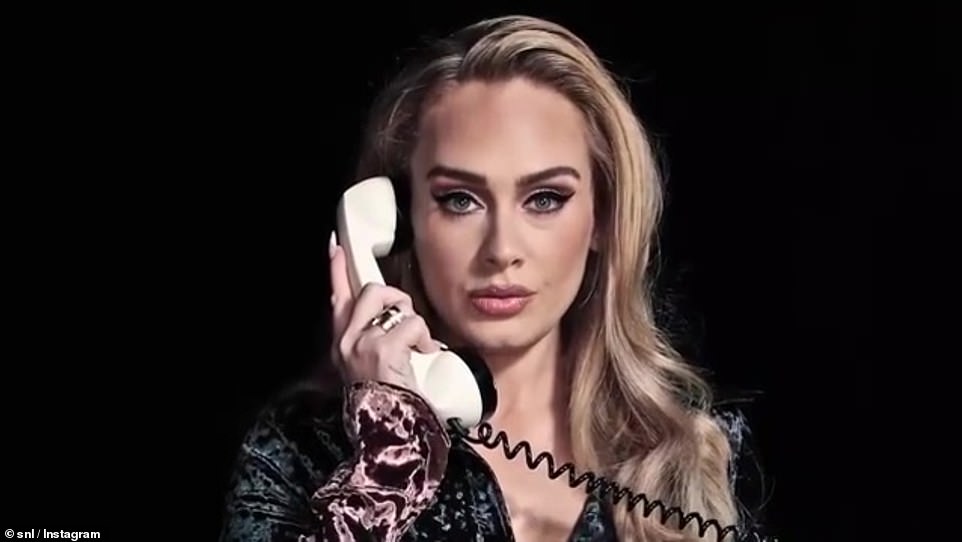 Adele in a skit played a contestant on The Bachelor, singing her hit song ‘Hello’ to the man

The singer was enraging other contestants by constantly breaking into song 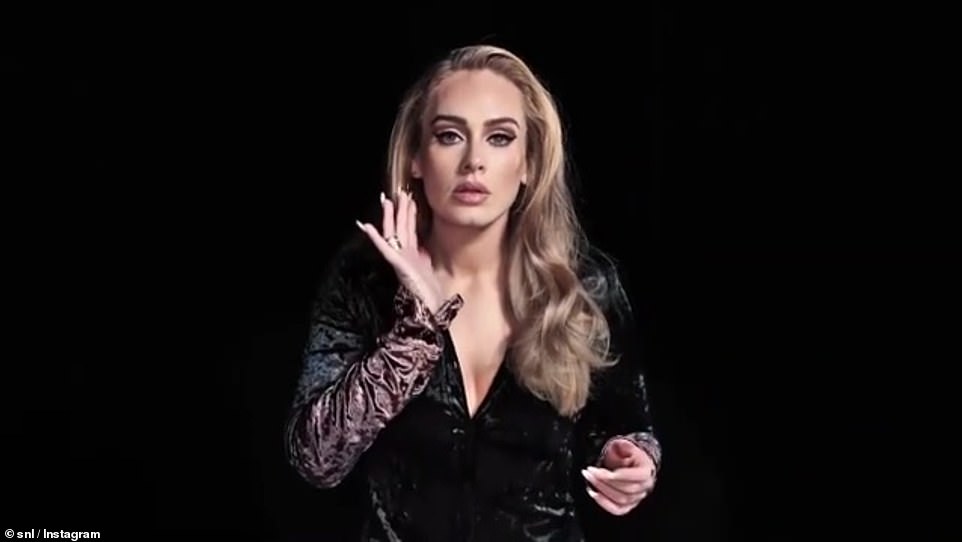 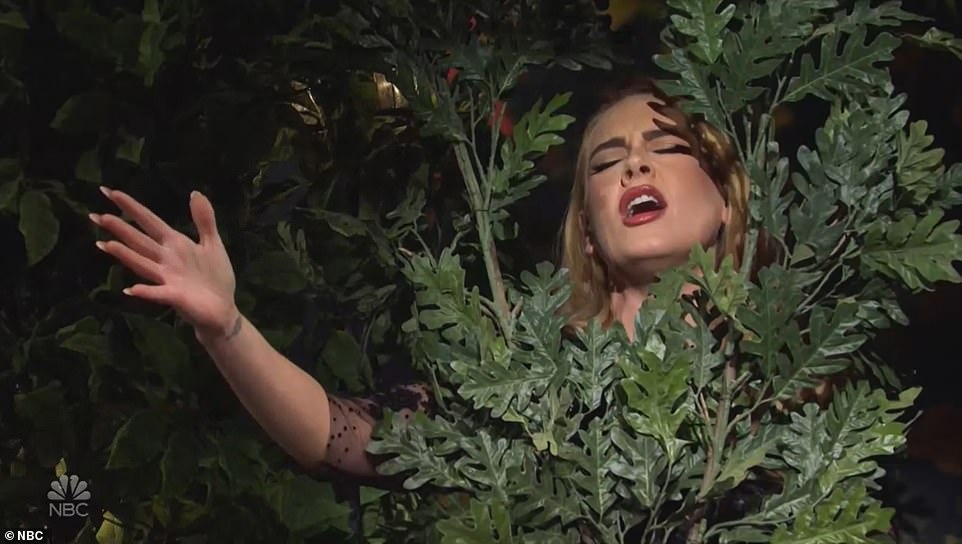 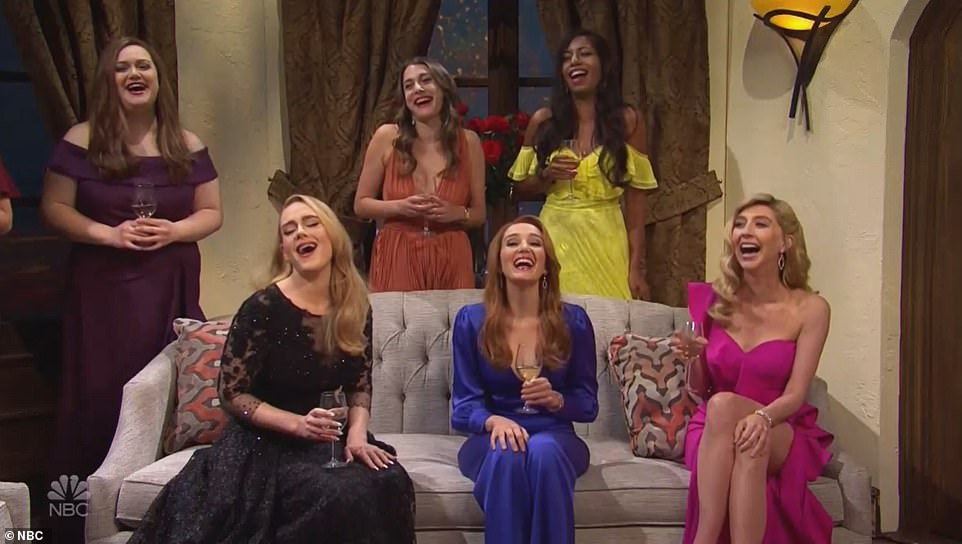 Adele infuriates her rivals on the reality TV show, in the skit, by breaking repeatedly into song

The contestant, in the skit, looks on bemused as Adele keeps on singing lines from her hit songs

She was then transformed into a ghost, haunting a mansion while Pete Davidson followed her around.

In a white gown, Adele floated through the corridors, reminiscing about her former husband – to Davidson’s bewilderment.

Adele was disappointed with how little she managed to scare him, even when she removed a necklace to show where her neck had been slit, an injury which turned her into a ghost. 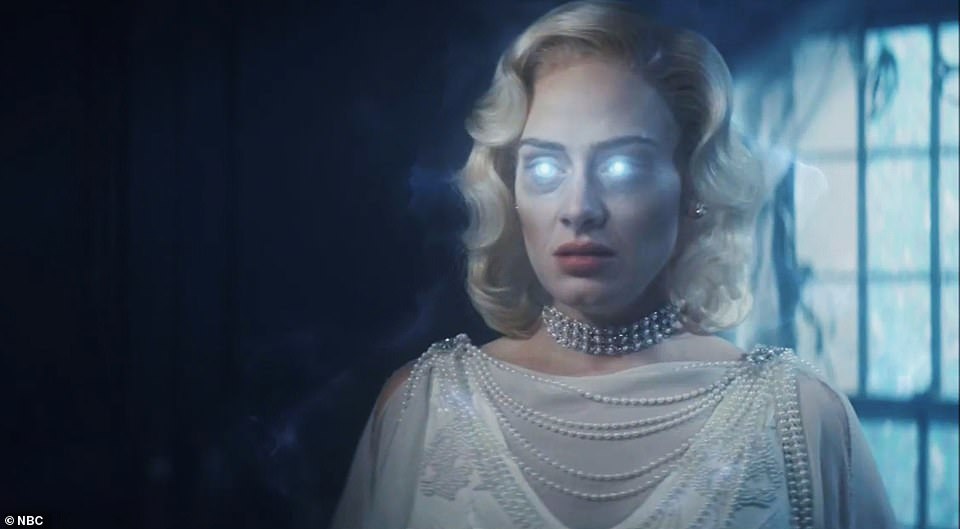 Adele played a ghost in a special pre-Halloween skit, haunting a mansion visited by Pete Davidson 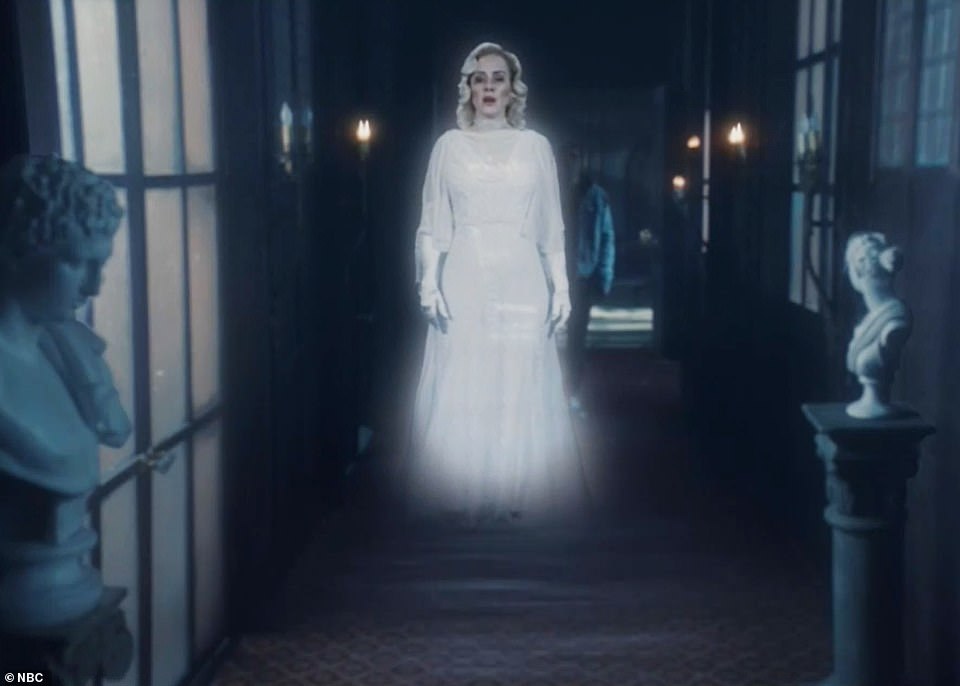 Adele floated through the corridors while Davidson followed her, unafraid and unimpressed

In another skit on Saturday, Adele was a customer at Kate McKinnon’s fortune telling salon.

‘I see no concerts in 2020, only coloring,’ McKinnon tells Adele.

The fortune teller tells an actress playing Tiffany Toobin: ‘I see your father. He is on a Zoom. And his weiner is out.’

She ends: ‘If any of you see JK Rowling, please tell her – stick to the books.’ 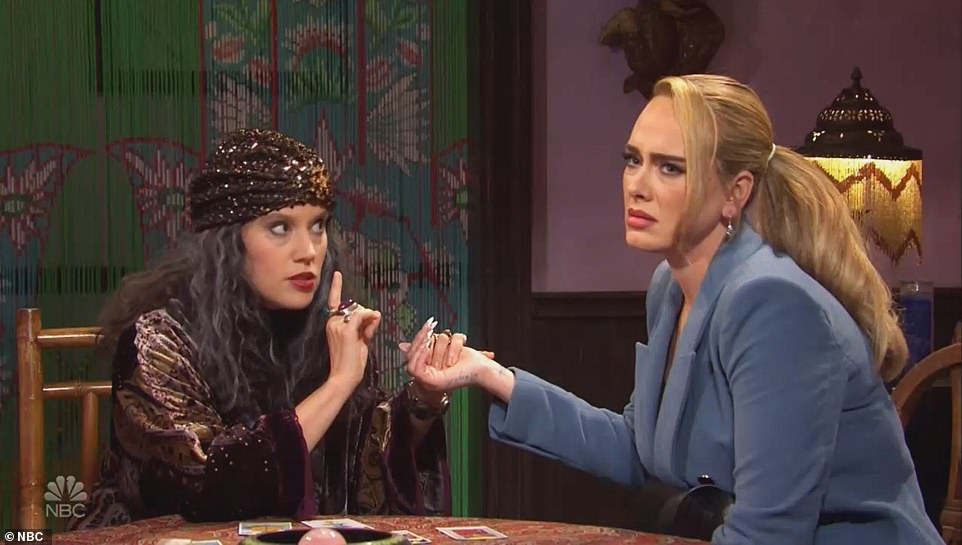 Kate McKinnon told Adele she was going to spend 2020 with ‘no concerts, only coloring’ 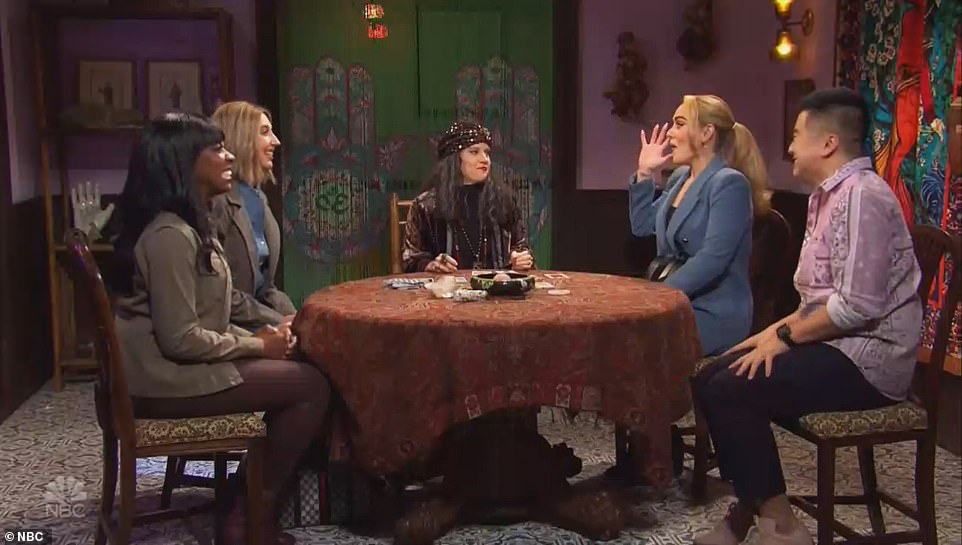 Adele also starred in a spoof tourism advert for ‘Africa’ – described as ‘the number one place for divorcees’.

As Adele and McKinnon spoke, a series of young handsome black men strolled by, with white women on their arms.

The pair repeatedly emphasized the wonder of ‘the bamboo’, with McKinnon repeating: ‘The tribesmen. The tribesmen.’

Adele struggled to keep her composure, doing her best to stifle her giggles.

She also played a COVID-restricted girlfriend, shouting up to a grandmother, played by Maya Rudolph, on a balcony. 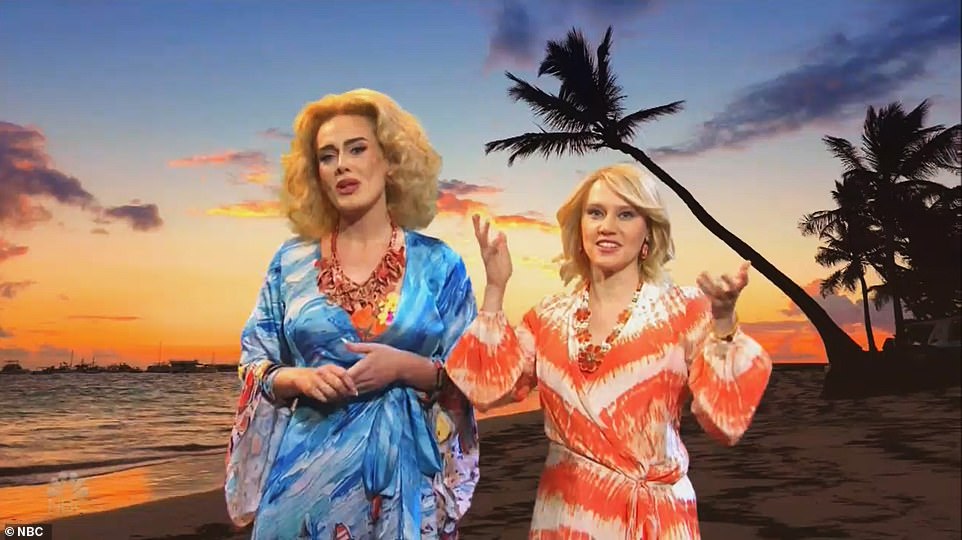 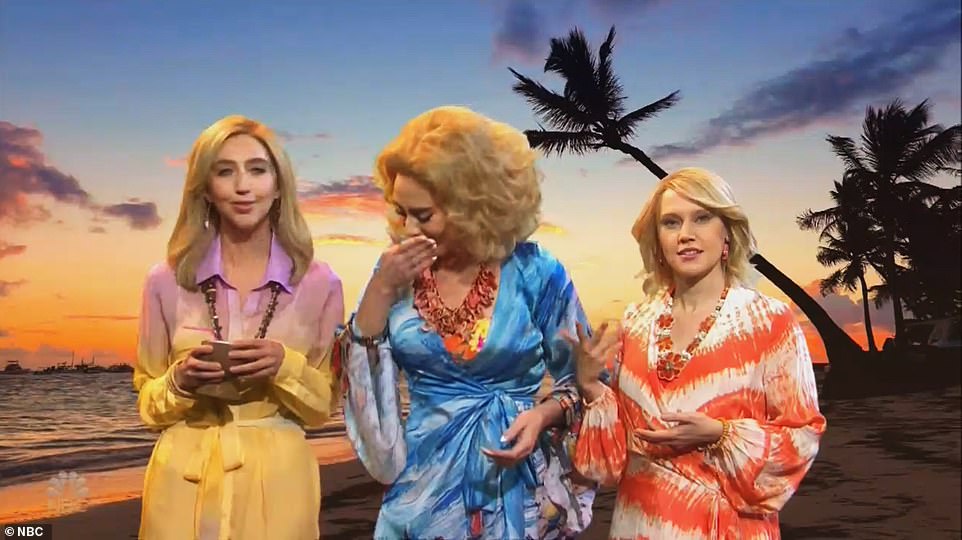 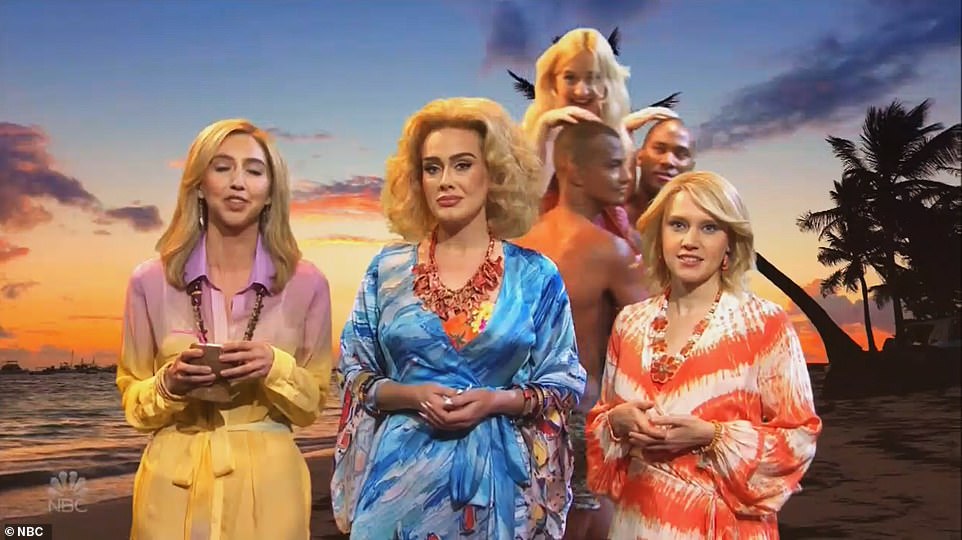 As handsome black men paraded behind them, Adele lauded the sights and McKinnon kept on praising ‘the tribesmen’ 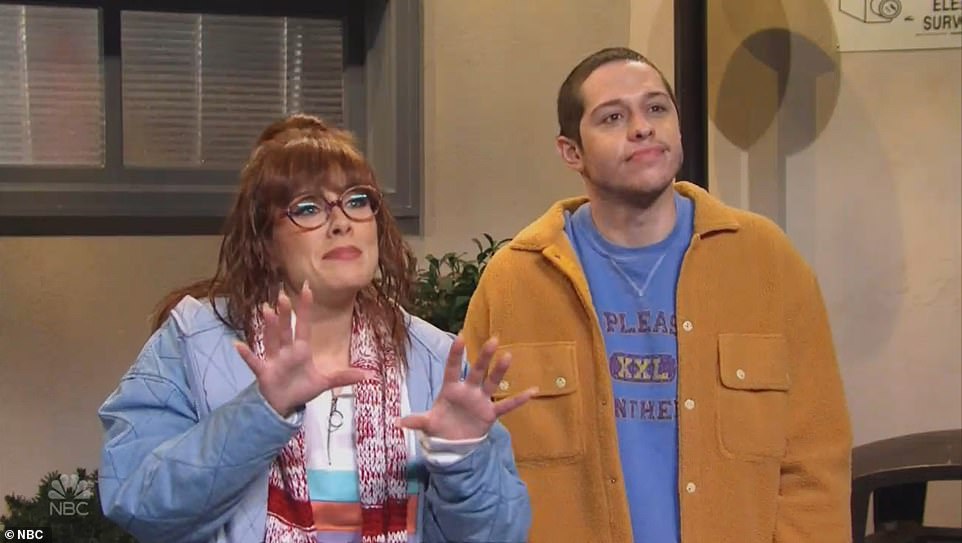 Adele, with Pete Davidson playing her boyfriend, shouted up to her ‘grandmother’ isolating in her apartment 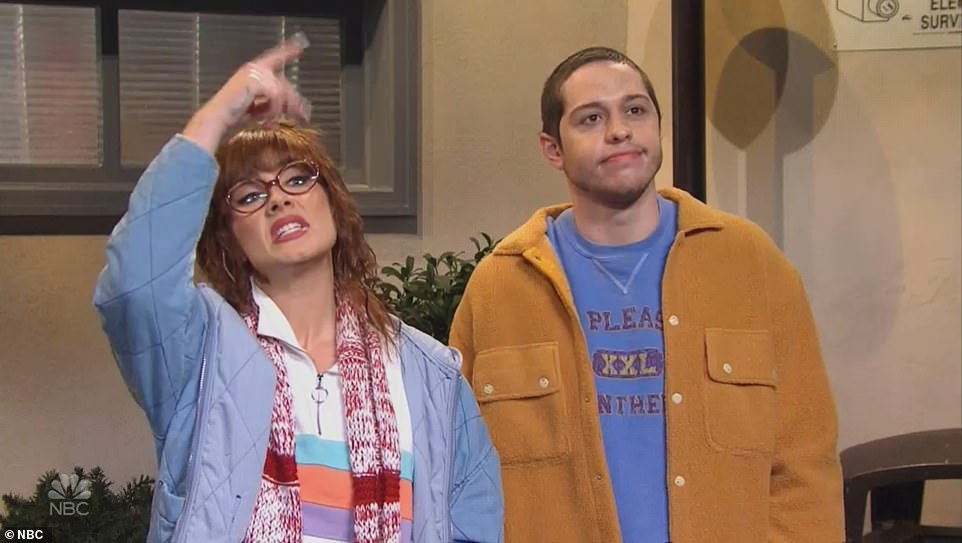 The singer shouted up at a her relative, played by Maya Rudolph, while Davidson looked on 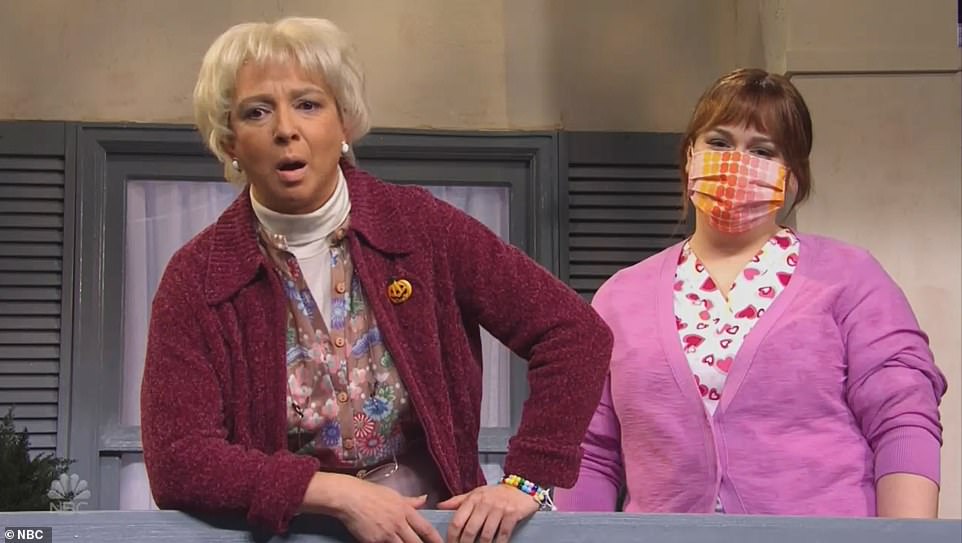 Maya Rudolph played the grandmother, greeting her relatives from her balcony during the COVID pandemic