‘This will be one of the things I remember’: Kindness in a year to forget for year 12s

A knock at the door from a woman she'd never met.

A package left behind with small but thoughtful gifts – snacks, "life hack" guides, skin care, a Uni-Ball pen and a specially-designed class of 2020 key-ring with a zero replaced by a toilet roll – all donated, gathered and distributed through the collective efforts of strangers.

And among the goodies, a handwritten letter from another unknown neighbour, signed only as "Michelle", reminding Templestowe College year 12 student Claire Merrillees that for all the disappointment of experiences lost, "the best is yet to come". 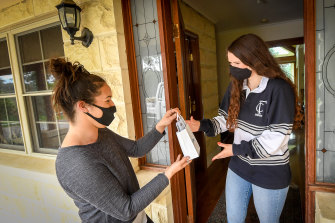 In a dispiriting year for Melbourne VCE students, cheated of the usual rituals of emerging adulthood and the final year of high school by a once-in-a-century pandemic, it was the most welcome and heartfelt surprise. 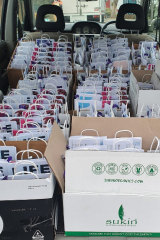 Packages on the way to Eltham and surrounds high schools.

"I kept studying but once I heard the car pull away I came downstairs and saw mum holding the bag and she told me that someone is delivering care packages to year 12s," Claire, 18, said.

"I chased the car down the driveway just to thank the lady because I was so taken aback. It's just such a selfless thing for people to do."

The Sunday Age last month reported on the grassroots plan, spearheaded by Patricia Callinan, who founded the Help 3095 and Surrounds Facebook page, to deliver 1500 packages to the year 12s of Eltham and nearby suburbs.

It seemed ambitious, if not impossible. But the 200-plus online army – assisted in fundraising and donations from Lions Clubs, council and local businesses, including one as far away as Queensland – have accomplished their mission and are dropping off the last of the packages this week.

"I'm overwhelmed and blown away by how the community has come together," Ms Callinan said.

Ms Callinan said the volunteers, all summoned and co-ordinated through the Facebook group, were assigned a different role so as to include as many people as possible. 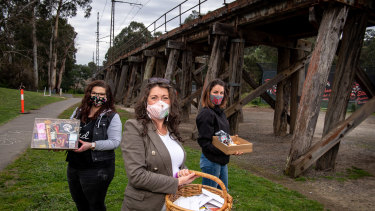 "I think some of the students are too overwhelmed to think about it at the moment, others are showing their emotions straight away, and it's beautiful," Ms Callinan said.

"None of these people had to do anything," she said.

"The whole thing meant a lot to me – that some random person that I didn't know would go out of their way just to make me and other year 12s know that we're being thought about.

"We haven't had a great deal to be happy about this year, but this will be one of the things I remember." Here’s How To Watch ‘The Craft: Legacy’ When The Sequel Premieres
We and our partners use cookies on this site to improve our service, perform analytics, personalize advertising, measure advertising performance, and remember website preferences.Ok