Toddler who lost his hands and feet to sepsis celebrating Christmas

A toddler who lost all four limbs to sepsis is celebrating his first Christmas at home and has received an extra special Christmas gift –  a toy car to help him get around.

Oliver Aisthorpe, aged one, made his miraculous recovery after a simple throat infection developed into deadly sepsis back in March.

Devastatingly, even after he beat the infection, Oliver’s limbs began to self amputate – and his leg even came away in his mother’s hand.

His mother Abigail Wardle, 23, is now speaking out to raise awareness of the deadly condition this Christmas to mark her brave toddler’s remarkable recovery. 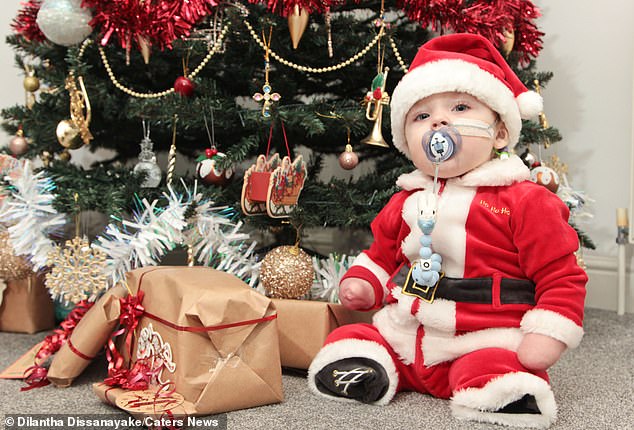 Oliver Aisthorpe, made his miraculous recovery after a simple throat infection developed into deadly sepsis back in March

She has even purchased Oliver an electric car which she gave to him on Christmas Day so that she’ll be able to use to steer her brave boy around in via remote control.

The 23-year-old said: ‘It’s been one to remember this Christmas. We didn’t expect him to make it this year so the fact that I’ve been able to open his presents with him makes me so proud of him.

‘We’ve gone out of our way this year to see as many as family as we can. It’s been so special.

‘We’ve lived in a nightmare for nearly a year and he’s come out the other end. Now he’s home it’s been much better but it’s still been tough.

‘He’s sitting up on his own now and rolling and he’s starting to activate his hips now. He’s come on leaps and bounds.

‘He’s a real fighter, he’s beaten all of the odds to be here. 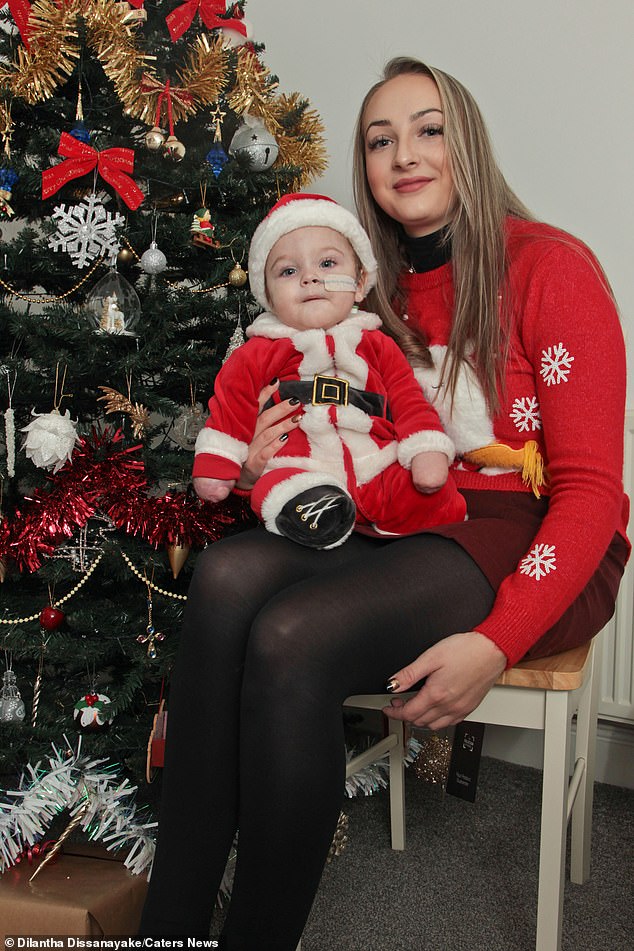 Oliver and his mother Abbie Aisthorpe sat by tree. The 23-year-old is now speaking out to raise awareness of the deadly condition this Christmas to mark her brave tots remarkable recovery

‘Oliver has touched so many hearts and he has such a bright future.

‘I can’t wait till he gets in the car properly on Christmas day. It’ll make things a bit easier for him and we’ll be able to have fun as I drive him round.

‘When he saw the car his smile almost broke my heart. It’s been the best Christmas ever.’

Abigail first took her son to an out-of-hours GP on Saturday, March 16, when she noticed his soft spot appeared to be sunken and she worried he was dehydrated.

But she says a GP sent her home and told her to give him fluids and Calpol.

However by the next day, he had deteriorated – and Abigail again took Oliver to see an out of hours GP. 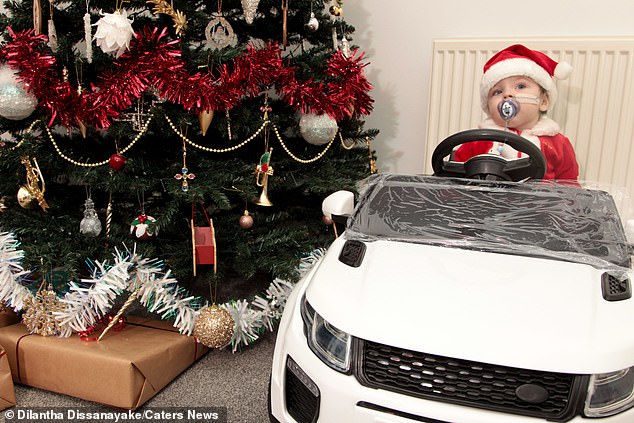 When he arrived at the hospital, a nurse took one look at him and rushed him to resus, where a team of doctors began battling to save his life.

Abigail said: ‘Oliver had seemed a bit under the weather but I was relieved when the GP said he was probably just dehydrated.

‘But that night, he got more ill and seemed lifeless. When I moved him, it was as though his bones were aching.

‘My gut said he wasn’t right so I took him back to the out of hours GP and within minutes, a nurse had whisked him off and he was being put under anaesthetic.

‘Everything was a blur. I still had no idea what was wrong with Oliver, I was just trying to hold it together as they were putting him to sleep.

‘I could hear a doctor on the phone to another hospital asking how to treat Oliver.

‘His hand and feet had started to go purple, and I just remember thinking he must be cold and telling them to put some socks on him.

‘A doctor sat us down and said: ‘Your son is very poorly’, I just thought, I know that, he’s in a coma and hooked up to a load of machines, but I had no idea how ill he was.

‘It was only when a nurse came over to speak to us and burst into tears that I realised how serious is was.

Doctors discovered that the sepsis had developed from an undiagnosed throat infection – which Oliver had never shown any symptoms of.

She and Oliver’s father were told twice that he was not going to survive, and they asked the hospital chaplain to baptise Oliver.

Incredibly, though, the little boy pulled through – and survived with no damage to his brain, but the sepsis has caused both hands and his legs to turn black and effectively die off.

Medics battled to save length in Oliver’s leg, but mother Abigail begged them to speed the operation along because she could see the leg self-amputating.

She said: ‘One day, a nurse was helping me lift Oliver from his bouncy chair back into the bed, and his leg just came away.

‘The doctors came running in and asked me if I wanted to leave the room because it was quite distressing.

‘I told them: ‘My son’s leg has just fallen off and is hanging on by a thread, I am not going to leave him here.’

‘I had to be there for him and just cuddle him and tell him mummy was here for him.

‘Once he had his limbs removed, he was like a different child – so happy and full of life, it seemed like a relief for him.’

Oliver was discharged from hospital in June and is now getting used to life without his limbs and is happily at home.

Abigail added: ‘I am just so proud of Oliver and what he’s overcome.

‘He has taken everything in his stride and is just so incredibly resilient. He makes me smile every day.

‘Already, he is trying to work out how to roll over and play with his toys with his stumps.

‘I could have come out of the other end of this with no son, so that’s what I focus on.

‘We have our bad days, but I know that there will be better days to come.’

What are the key symptoms of sepsis? The ‘silent killer’ that can cause death in minutes

Sepsis, known as the ‘silent killer’, strikes when an infection such as blood poisoning sparks a violent immune response in which the body attacks its own organs.

It is a potentially life-threatening condition, triggered by an infection or injury.

Instead of attacking the invading bug, the body turns on itself, shutting down vital organs.

If caught early enough, it’s easily treated with intravenous antibiotics and fluids, but these must be given as soon as sepsis is suspected – it strikes with frightening speed and, for every hour of delay, a patient’s chance of dying increases 8 per cent.

Sepsis is a leading cause of avoidable death killing 44,000 people each year

The early symptoms of sepsis can be easily confused with more mild conditions, meaning it can be difficult to diagnose.

A high temperature (fever), chills and shivering, a fast heartbeat and rapid breathing are also indicators.

A patient can rapidly deteriorate if sepsis is missed early on, so quick diagnosis and treatment is vital – yet this rarely happens.

In the early stages, sepsis can be mistaken for a chest infection, flu or upset stomach.

The six signs of something potentially deadly can be identified by the acronym ‘SEPSIS’:

Anyone who develops any of these symptoms should seek medical help urgently — and ask doctors: ‘Could this be sepsis?’