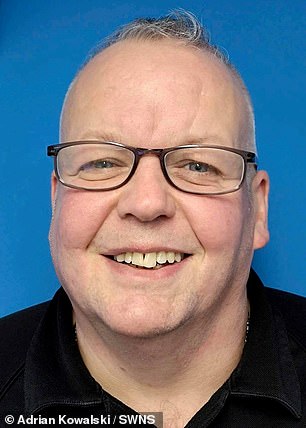 Pictured: Adrian Kowalski, 52, who was almost rammed off the road by an Amazon delivery driver

A motorist who was nearly rammed off the road by an Amazon lorry driver has described how he ‘feared for his life’ during the heart-stopping near miss.

Dramatic dashcam footage previously published by MailOnline shows a delivery driver veer towards oncoming traffic to ‘chase’ Adrian Kowalski’s vehicle and force it to swerve off the road after they almost collided at a roundabout.

The 52-year-old said he was ‘really shaken’ after he spotted the 44-tonne Artic truck bearing down on him near the M1 in Barlborough, Derbyshire, at around 1pm last Wednesday.

The footage shows the truck driver appearing to chase after Mr Kowalski’s 3.5 tonne lorry after a near miss on a roundabout on Oxcroft Way.

The HGV swerves onto the wrong side of the road before veering towards Mr Kowalski’s vehicle, causing him to take evasive action to avoid a certain collision.

Amazon said the delivery driver, who was employed by a third party, will no longer be working for them while the incident has been reported to Derbyshire Police.

Mr Kowalski, from Burton-upon-Trent, Staffordshire, who delivers supplies for Somercotes Office Furniture, said: ‘I was left really shaken by it to tell you the truth. 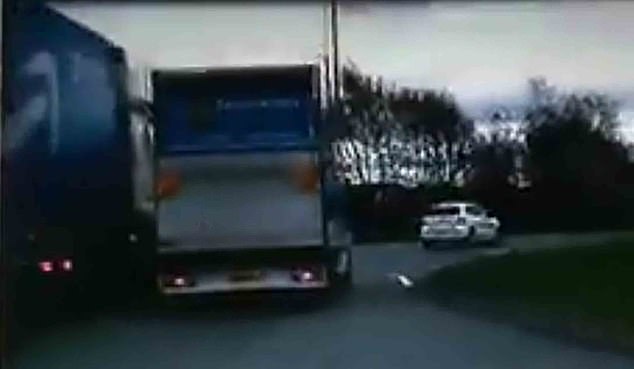 An Amazon lorry driver appears to ‘chase’ a smaller lorry after the driver believed the truck cut out in front of them on Oxcroft Way in Barlborough, Derbyshire on November 18

‘I had just been on my way to a delivery when I was aware this lorry had almost hit me on a pervious roundabout.

‘He was in the wrong lane to start with and didn’t indicate, so he was at fault from the start, but he sounded his horn and started flashing his lights.’

Mr Kowalski said the delivery driver than followed him to the next roundabout, where he was forced to mount the kerb ‘as he tried to ram me off the road.’

‘If I hadn’t gone up the verge there would have been a certain collision. He was on the wrong side of the road and could have killed somebody,’ he said.

‘I looked in my left mirror and saw this great big lorry bearing down on me and I just thought, “wow”.

‘I’ve driven for 35 years and never seen anyone in a lorry driving like that – I’m absolutely gobsmacked. 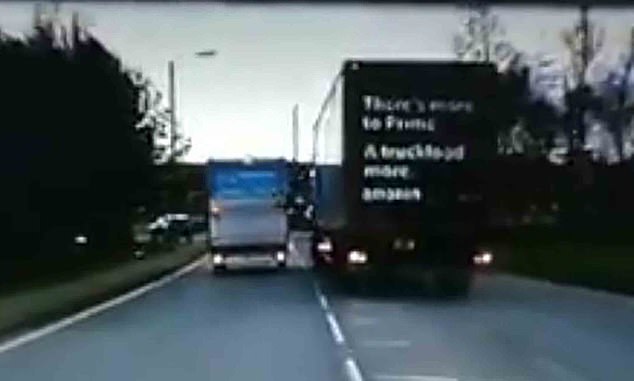 In shocking dashcam footage, the large Amazon HGV can be seen swerving into oncoming traffic and almost colliding with the smaller lorry 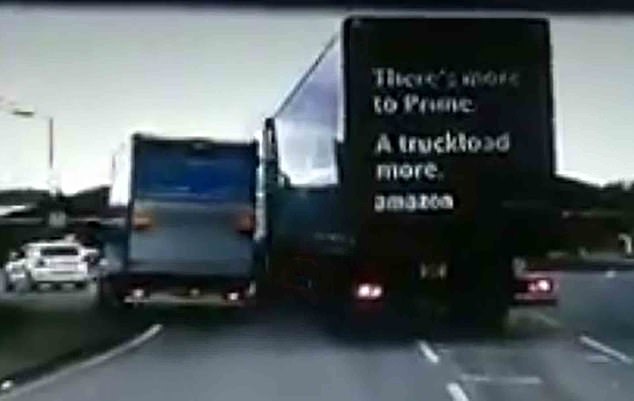 ‘I was frightened. I stopped round the corner for a couple of minutes to collect myself. I’ve never had a near miss like it.

‘I’ve contacted the police and they are looking to see what they can do. If he drives with that attitude he needs to be taken off the roads.’

He added that although Amazon have confirmed the driver will not work for them any longer, the man is ‘still out there’ on the roads.

‘It’s all well Amazon saying he won’t deliver for them but he is still out there delivering for others and is clearly a danger on the roads,’ Mr Kowlaski said.

‘If he can do that to me, he can do it again – and next time somebody might not be so lucky.’

Another lorry driver, Richard Madin, 53, captured the incident on dashcam which he uploaded to social media.

He told the BBC: ‘If they were driving a car, that’s bad enough – but in a 44-tonne truck it’s just really irresponsible.’

An Amazon spokesperson said: ‘We work with a variety of haulier partners to get packages around our logistics network and are committed to ensuring that their drivers drive safely at all times.

‘The driver will no longer be carrying parcels on behalf of Amazon.’