One day after Russia revealed that it had detained seven-time WNBA All-Star Brittney Griner on drug charges, U.S. Secretary of State Antony Blinken was asked what the Biden administration planned to do to help her.

Blinken, speaking Sunday from Moldova, was reluctant to comment specifically on Griner, citing “privacy considerations.” Answering generally, Blinken told reporters, “Whenever an American is detained anywhere in the world, we of course stand ready to provide every possible assistance, and that includes in Russia.”

Griner was arrested at an airport near Moscow last month after Russian authorities searched her luggage and allegedly found vape cartridges containing hashish oil. The Russian Federal Customs Service issued a statement Saturday that it had opened a criminal investigation into the large-scale transportation of drugs, which in Russia can carry a prison sentence of up to 10 years.

The timing of Griner’s detainment raises concerns that her fate could become entangled in the confrontation between Russia and the West over war in Ukraine. A former top Pentagon official told Yahoo Sports on Saturday that she’s concerned Russia may view Griner as a “high-profile hostage” who could serve as a valuable bargaining chip.

If so, freeing Griner quickly could prove challenging. William Partlett, an associate professor at Melbourne Law School and an expert on Russian politics, told Yahoo Sports that the “decreasing connections and trust” between the U.S. and Russia are an obstacle, as is the possibility that Russia could demand more than the U.S. is willing to offer.

“Maybe the U.S. has someone in custody who they could exchange?” Partlett said. “But the sanctions and aid to Ukraine will not be lessened in order to get her out.”

It’s unclear exactly how long Griner has been in custody because Russian authorities have not specified when in February she was detained. At the time of her arrest, Griner had just flown from New York to Russia, where the two-time Olympic gold medalist plays for European basketball powerhouse UMMC Ekaterinburg during the WNBA offseason.

In an Instagram post on Saturday night, Griner’s wife thanked “everyone who has reached out” with prayers and support. Cherelle Griner said she loves Brittney “wholeheartedly” and called this “one of the weakest moments” of her life.

“I understand that many of you have grown to love BG over the years and have concerns and want details,” Cherelle Griner wrote. “Please honor our privacy as we continue to work on getting my wife home safely.” 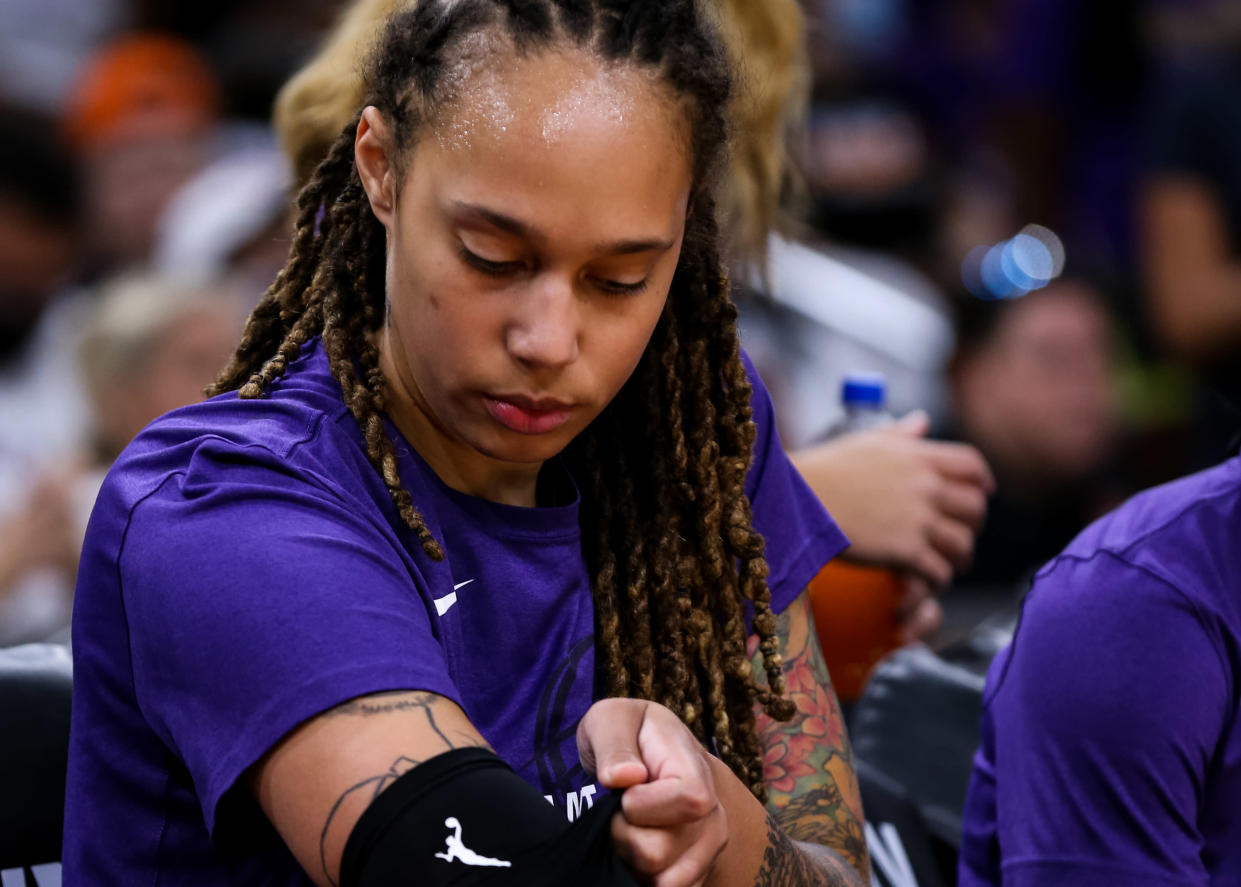 Griner is not the first U.S. citizen Russia has held in custody as tensions between the two nations have escalated. The U.S. so far has been unable to negotiate the release of two former U.S. Marines that Russia has imprisoned.

On Sunday, when responding to the question about Griner, Blinken brought up Whelan and Reed, and described both as “unjustly detained.” Blinken concluded, “We have an embassy team that’s working on the cases of other Americans who are detained in Russia. We’re doing everything we can to see to it that their rights are upheld and respected.”

LGBTQ groups have expressed particular concern about the treatment of Griner given that she is an openly gay woman being detained in a country that has a history of restricting LGBTQ rights. Athlete Ally, an organization that advocates for LGBTQ rights in sports, tweeted Sunday, “Thinking of the countless times @brittneygriner has spoken out for LGBTQ+ equality. We all must speak out for her now and call for her to be safely released back home to her family.”