THE BRITISH government could lift the third national coronavirus lockdown sooner despite Covid cases flatlining, a top scientist has claimed.

Data from the ZOE Symptom Tracker App shows that new daily cases have started to plateau to just under 10,000 – but experts say there is "no reason to panic".

The lead scientist on the app, Professor Tim Spector, said the UK is "on track" when it comes to lifting restrictions.

Prof Spector said: "With decisions now being made on data rather than dates, it feels like we on track to lift restrictions sooner rather than later."

His comments come after Prime Minister Boris Johnson set out his roadmap out of lockdown earlier this week.

The PM told MPs in the House of Commons his "cautious but irreversible" plan to get the country back to normal after the "extraordinary" success of Britain's speedy vaccine rollout.

Mr Johnson said data would be reviewed every five weeks.

He vowed to focus on "data not dates" when easing Brits out of restrictions. 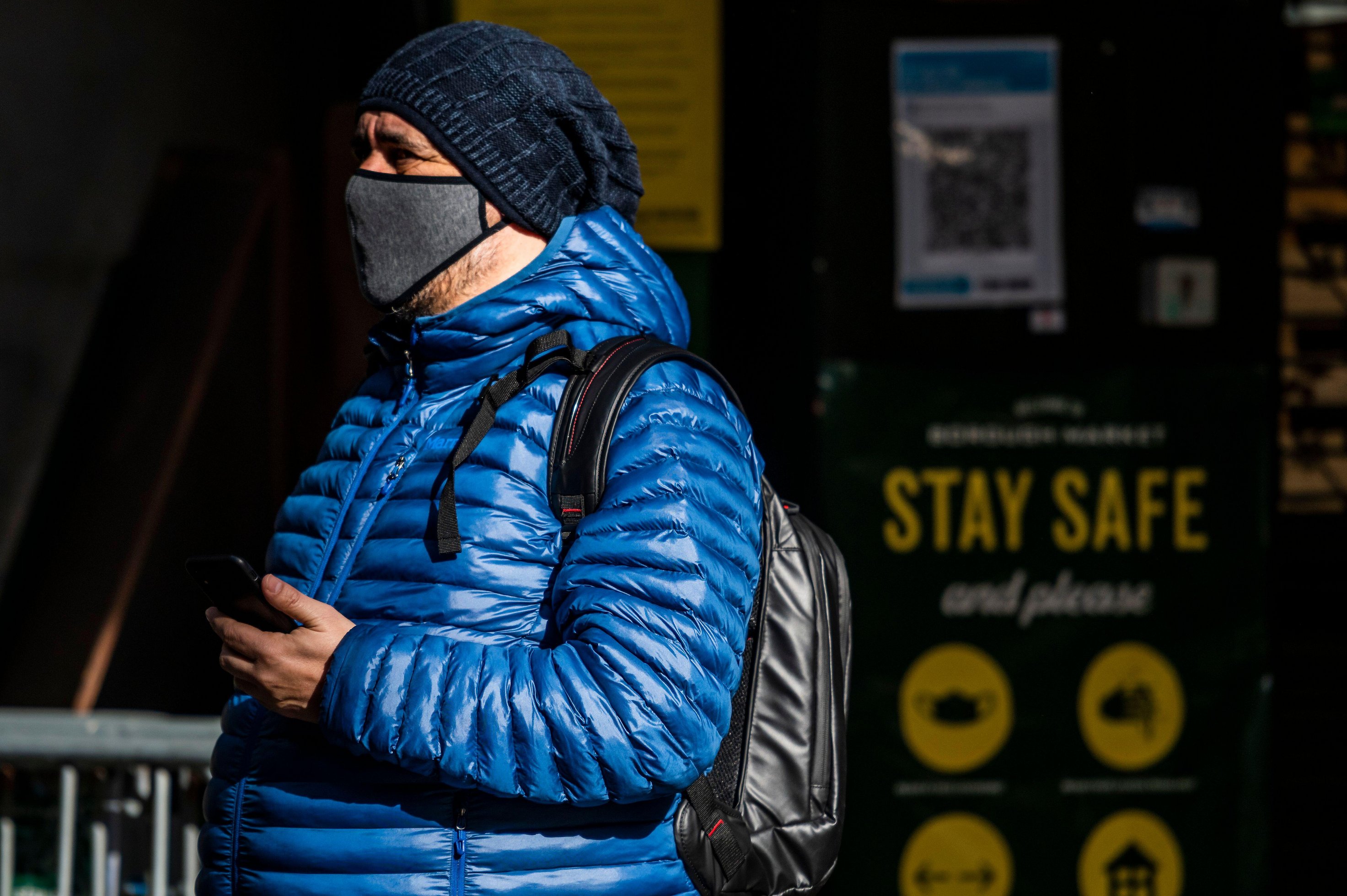 Looking at the data and figures from the Office for National Statistics (ONS) published today also show that cases are flatlining.

In the week up to February 19 the ONS states that cases of Covid have started to decline.

The data from the ONS also suggests that cases have fallen across all regions in England – aside from Yorkshire & The Humber, where the experts say "the trend is uncertain".

But graphs provided by the ONS show that cases are flatlining in the region.

By looking at the data on a regular basis, Mr Johnson said he hopes to get Britain booming and back to near normal by June, and give every adult a vaccine by the end of July. 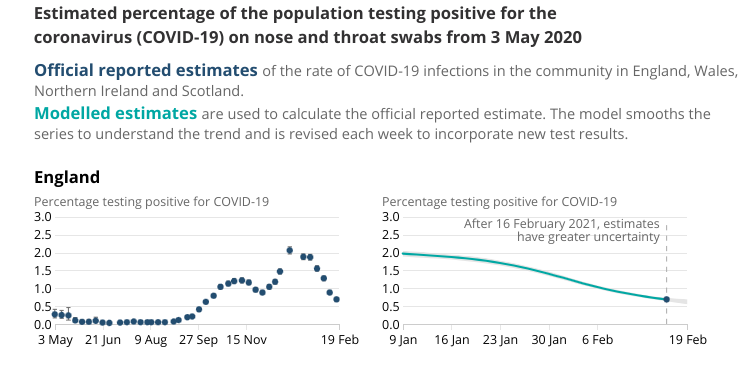 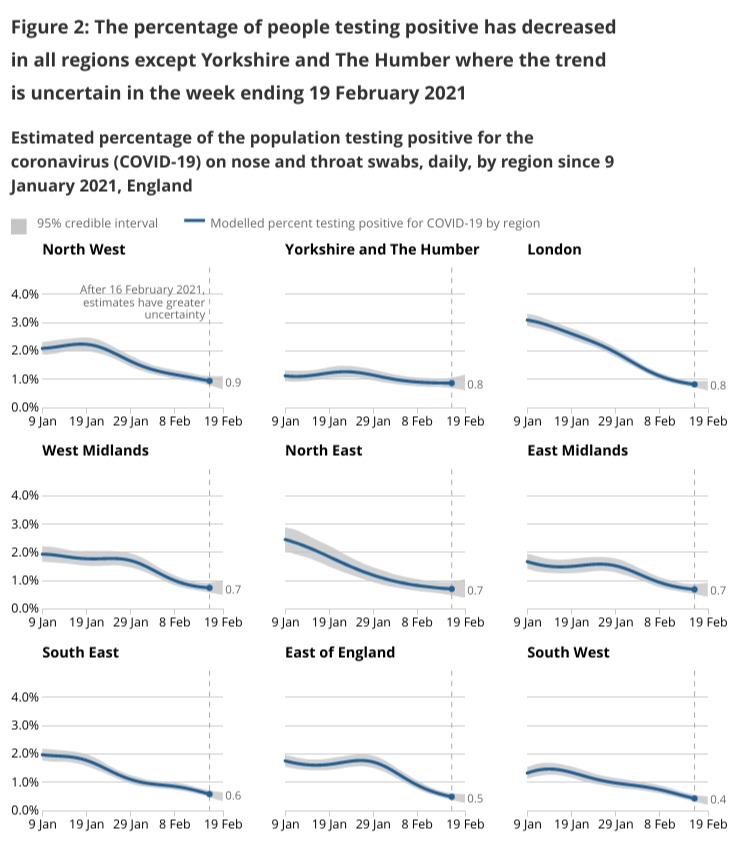 All restrictions will be lifted at the same time across England – with no more tiers in sight – but each step will be assessed against four tests before restrictions ease.

So far across the UK over 18.69 million people have had a first dose of either the Oxford/AstraZeneca jab or the Pfizer/BioNTech offering, with over 700,000 people having had their second.

Prof Spector said the vaccine rollout would mean that large groups of people will be protected.

He said: “The data over the last few weeks shows that the daily new cases have started to plateau at just under 10k cases but this isn’t reason to panic.

"The key metric isn’t just the total number of cases, which is mainly among people of working age.

"We need to focus on the pressure on the NHS and the number of admissions and deaths, which are both still falling rapidly."

Government data shows that at present in the UK there are 16,059 people in hospital with Covid-19.

Prof Spector added: "We are in a similar situation to late May last year, just before restrictions were lifted but the difference this time is, while the variants may be more infectious, we have a vaccine that works and the older age groups are largely protected. 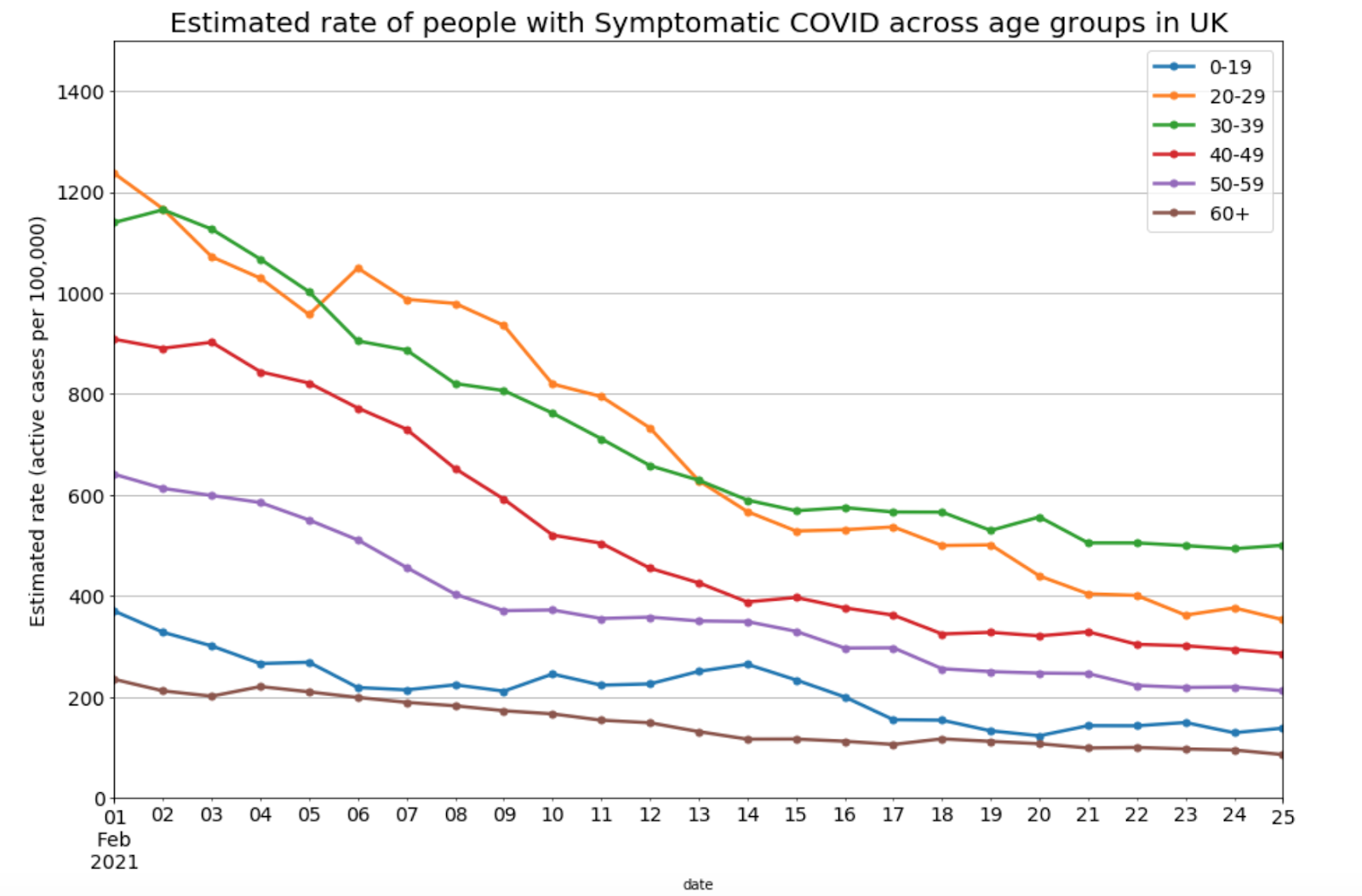 "Having some residual infections in the population is inevitable for a while and although we want to push it lower, it shouldn't be a major cause for concern."

Data from the Zoe app covers the period from February 14 to February 21.

The figures show that there are currently 9,545 new symptomatic cases of Covid in the UK on average,

Around on in 416 people in the UK currently have symptomatic Covid. 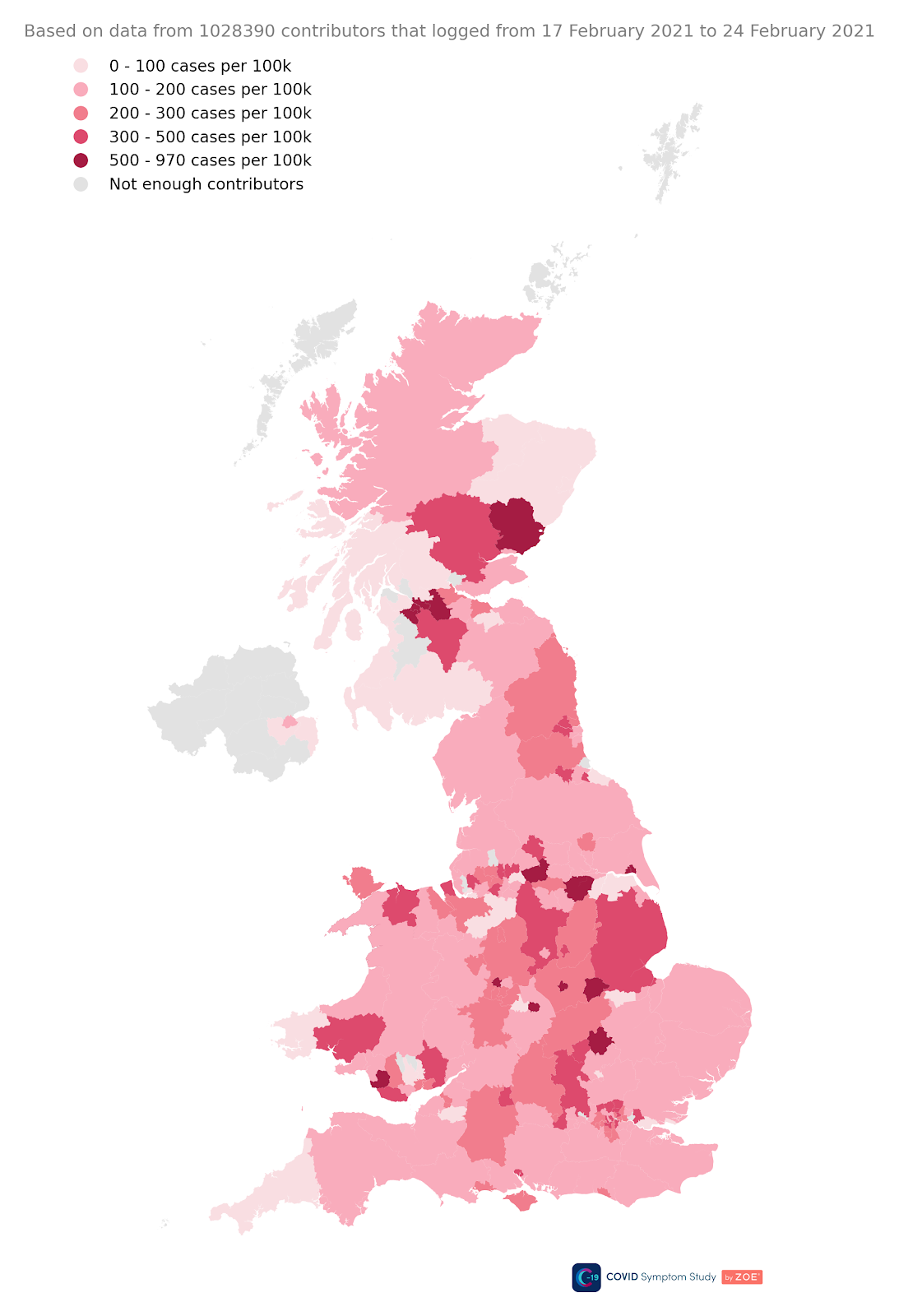 The estimates from the team at the ZOE app are different from the R rate release by Sage every Friday afternoon.

Last week the experts stated that the R rate was between 0.6 and 0.9 – it is set to be updated later today.

The data from the ZOE experts comes as Government figures yesterday showed a further 323 died from Covid-19.

The figure is down by a quarter compared to the rise in deaths the same time last week.

Another 9,985 infections were confirmed, meaning 4,154,562 have now tested positive for the bug in Britain since the start of the pandemic.

The number of deaths confirmed yesterday afternoon is down by 28 per cent on last Thursday's rise (454).

And it is less than half the size of the figure recorded the Thursday before that (678), showing signs the spread is slowing.

They remain almost identical to the number of new infections logged on Wednesday (9,938).

The latest figures mean a total of 122,070 have now died with Covid in the UK since the start of the outbreak.