UK snow map: Where is it going to snow?

BITTERLY cold Arctic air and 70mph winds have resulted in freezing temperatures and snow on the ground on Easter Monday.

Weather warnings are in place as the Arctic trough spreads southwards into the UK, bringing wintry showers, say forecasters. 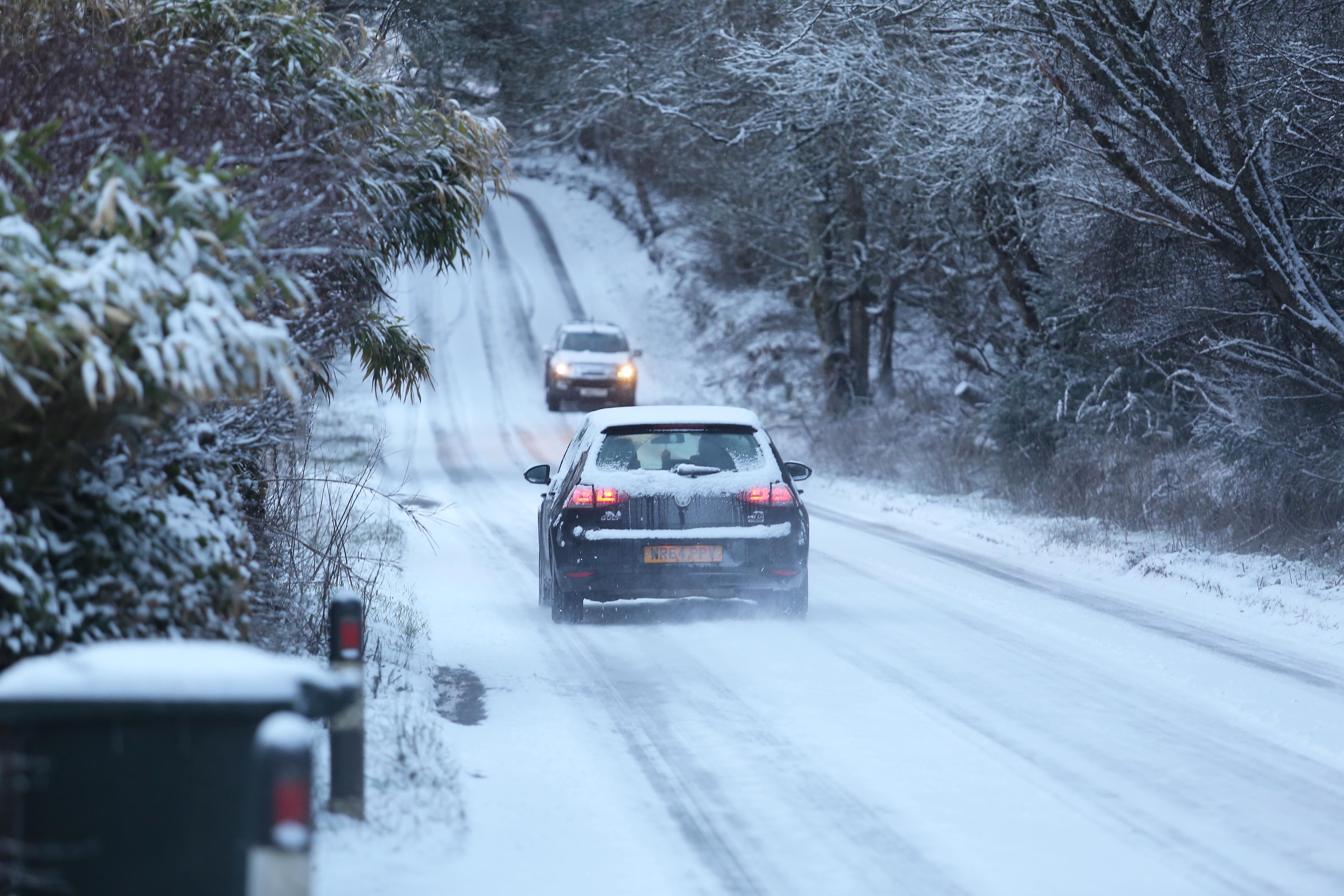 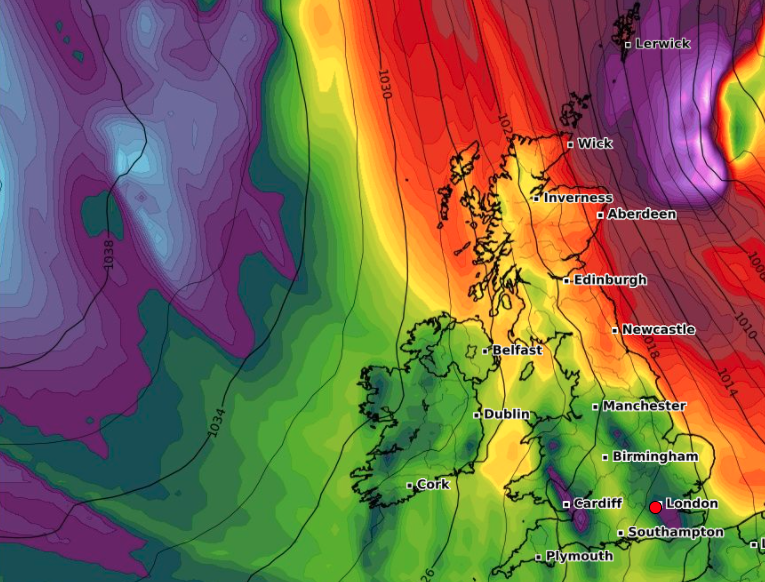 Where has it snowed in the UK?

It's mainly been snowing in central and north Scotland.

Snow warnings remain in place for northern Scotland, with as much as 15cm falling in higher areas.

People have also tweeted about snow sprinkling central England, and Northern Ireland – while sharing snaps of Manchester, Derbyshire, Accrington in Lancashire, and there have even been snow flurries spotted in Hertfordshire.

BBC Weather says that many “people have been getting in contact about snow falling in Stirling, Durham, Boston… lots of places."

There's been a "mix of wintry showers and sunshine – depending on where you are", it adds.

For example, the mercury plummeted to -4C in Tyndrum, Scotland, whereas Norwich was 3C this morning, while Scarborough was a freezing 0C.

Cold air plunging across the country is bringing "a good packet of snow showers," the broadcaster adds. 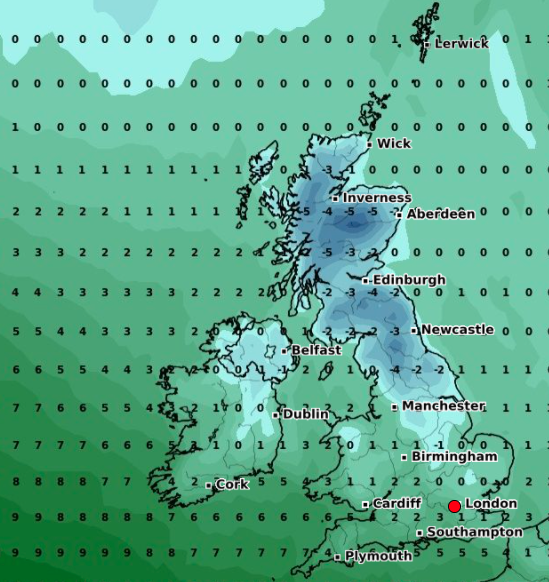 The Arctic air will bring wintry showers, particularly around the coasts, and Scotland, where snow will accumulate even at lower levels.

Wind gusts of up to 71mph are also forecast in northern Scotland – but gale force breezes will also hit other parts of the UK throughout the day.

"We are looking at blizzards across the very far north of Scotland and some rough seas to boot. Temperatures are below average for most of us.

"When you add on the wind chill, it’s going to feel even colder than those temperatures," says BBC Weather. 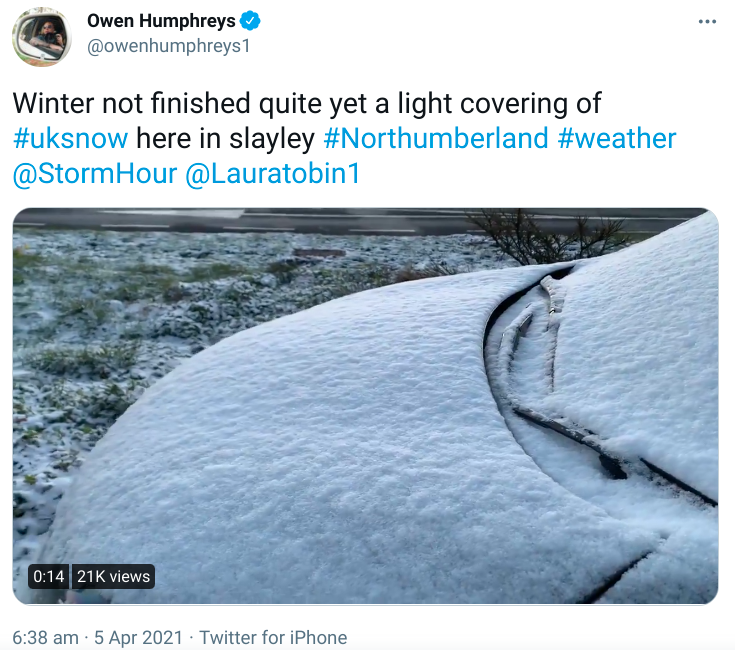 Will it snow today?

Wintry showers in the north "will be heavy at times with snow falling to low levels.

"Southern and central Britain have sunny periods but isolated wintry showers are possible.

"Temperatures will be well below the early April norm and a strong wind makes it feel bitterly cold," it adds.

They're being blown in on a strong northerly wind.

Despite the odd sunny spells, it'll feel quite bitter. Temperatures range from 3C in Stornoway, Scotland, to 8C in Plymouth, and 9C in Cardiff, Wales.

But, it'll feel much colder, with the wind factor making it feel like a chilly -4 to -7C in parts of Scotland.

Weather warnings for wind and snow are in place on Easter Monday for northern Scotland.

The Met Office says that "frequent snow and hail showers, accompanied by a very strong northerly wind may lead to some disruption".

Monday's temperatures are expected to be up to 11C lower than during the sunshine of the Easter weekend as cold northern winds move over the country. 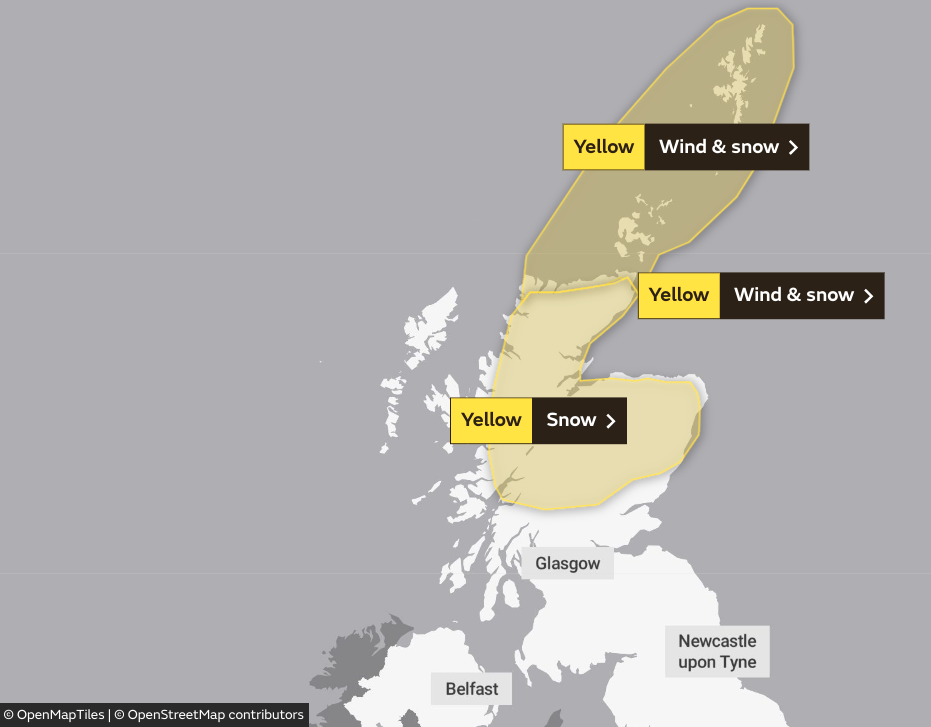 It comes after the Met Office said highs of 17.9C (64.2F) were recorded in Pershore, Worcestershire, on Easter Sunday.

Met Office forecaster Simon Partridge said: "There'll be a drop of 11 degrees between one day and the next, so you will definitely notice it!"

He explained that a change of wind direction would bring a change in the atmosphere, leading to chilly weather.

The wind will play a key factor in Monday's weather, as while southern England may see highs of up to 7C, gusts up to 30mph may make the temperature feel closer to freezing.

Average temperatures for this time of year are around 10 to 12C but parts of the UK saw the mercury reach nearly 24C (75.2F) last Wednesday. 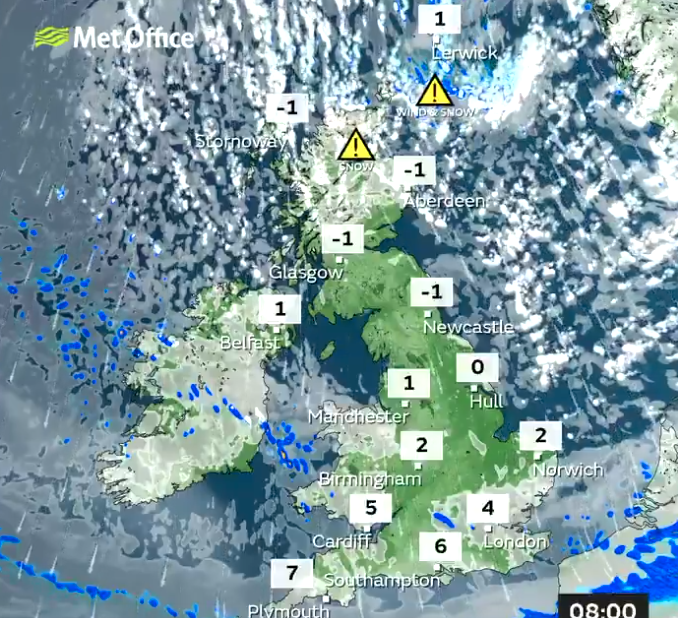 During Tuesday and Wednesday, it "remains very cold and there is a risk of wintry showers in much of the country", says the Weather Outlook.

It adds: "The heaviest ones are expected to be in the north and around coastal counties, but some could push inland. Snow continues falling to low levels."

BBC Weather says that on Tuesday there will "still be wintry showers, with hail, sleet and snow.

"Coming in from northern Scotland, they’ll also hit Wales, Northern Ireland, towards the Moors, eastern parts of England, East Anglia, and there’s a great chance of them falling inland tomorrow as well.

"Temperatures will range from 3-9C on Tuesday." 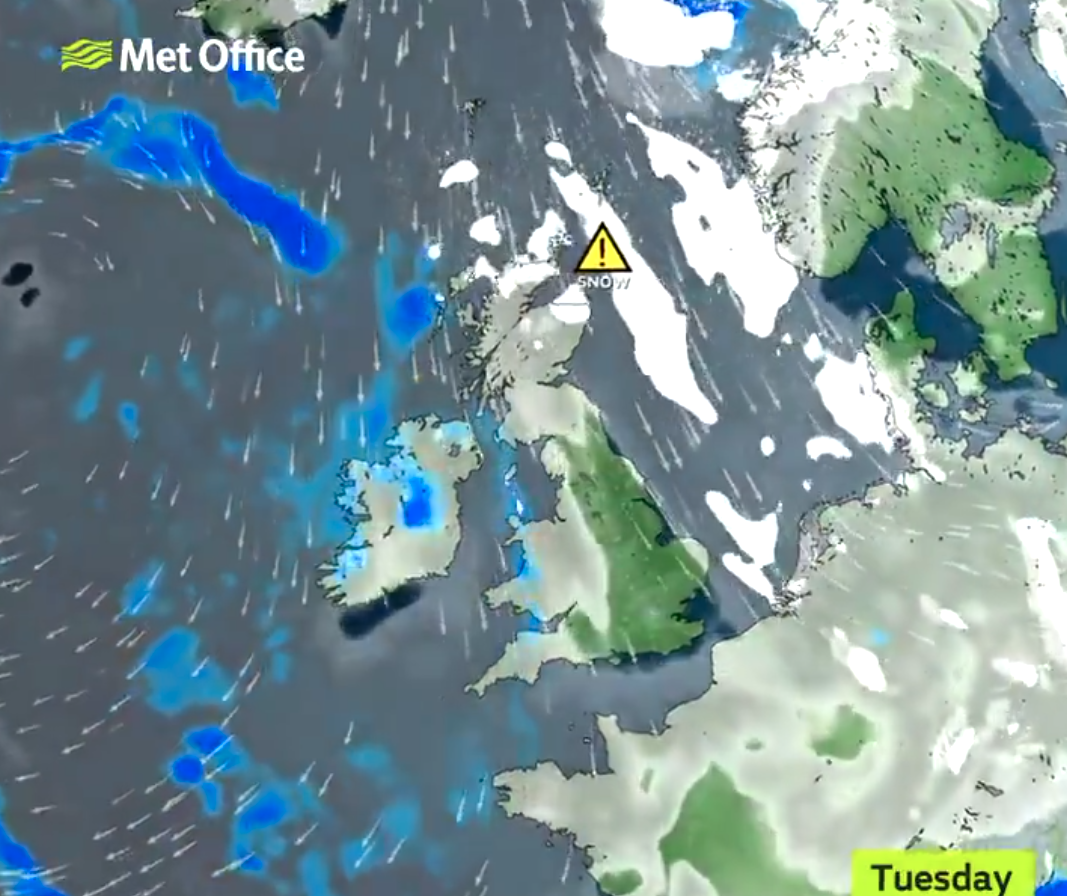 Temperatures are expected to remain below average for the coming week.

Met Office chief meteorologist, Dan Suri, said the agency has been "signalling a dramatic change in weather type for several days, with very cold air moving from the Arctic, bringing snow showers and freezing overnight temperatures and all accompanied by strong northerly winds accentuating the cold.

"Although snow showers will predominantly affect the north and north west, they could occur almost anywhere in the UK early this week, at least temporarily. 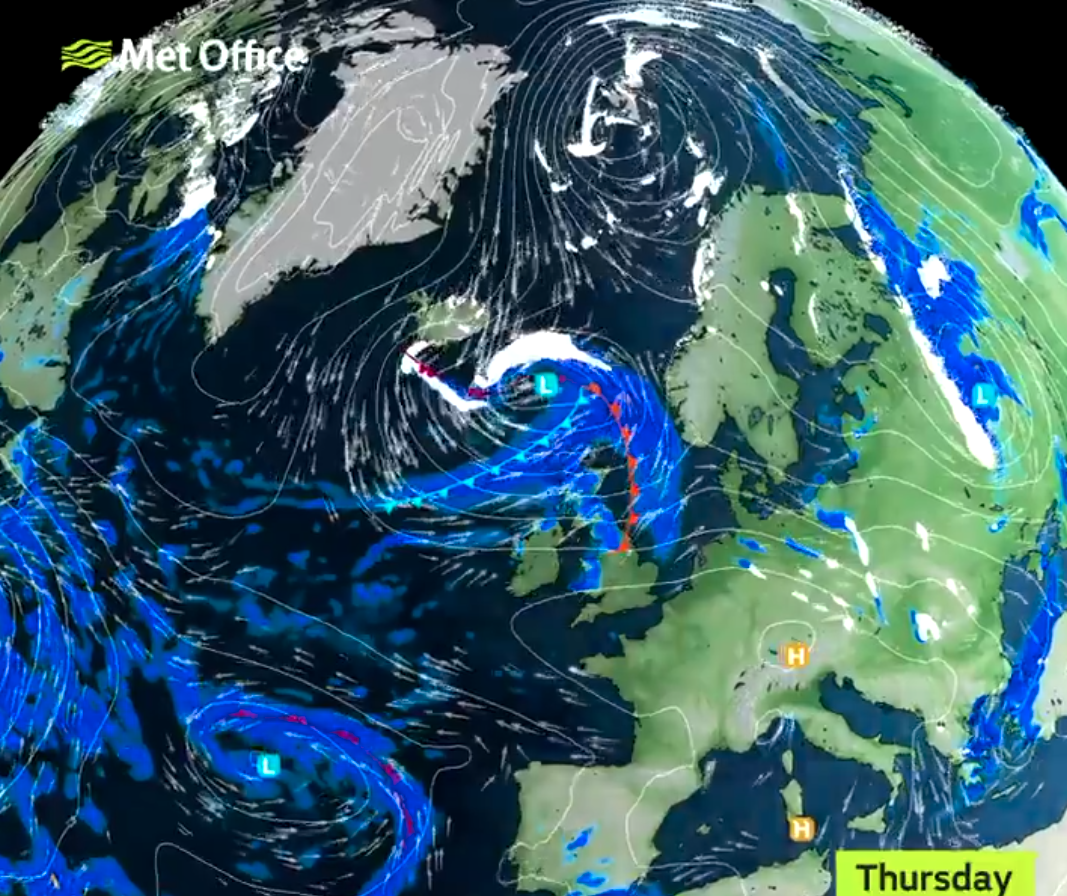 "Some areas will remain drier and see few, if any, showers, for example: the southeastern quarter of England and the Central Belt of Scotland.

"Even in southern parts of the UK daytime maximum temperatures will struggle to rise above 9C, and although this region is likely to remain drier, the occasional wintry shower cannot be ruled out.”

The Weather Outlook adds that "through Thursday and Friday an area of low pressure probably tracks eastwards to the north of Scotland.

"Outbreaks of rain, sleet and snow push across the northern half of the UK.

"Southern and central regions may stay mostly dry and it won't be as cold as it has been. 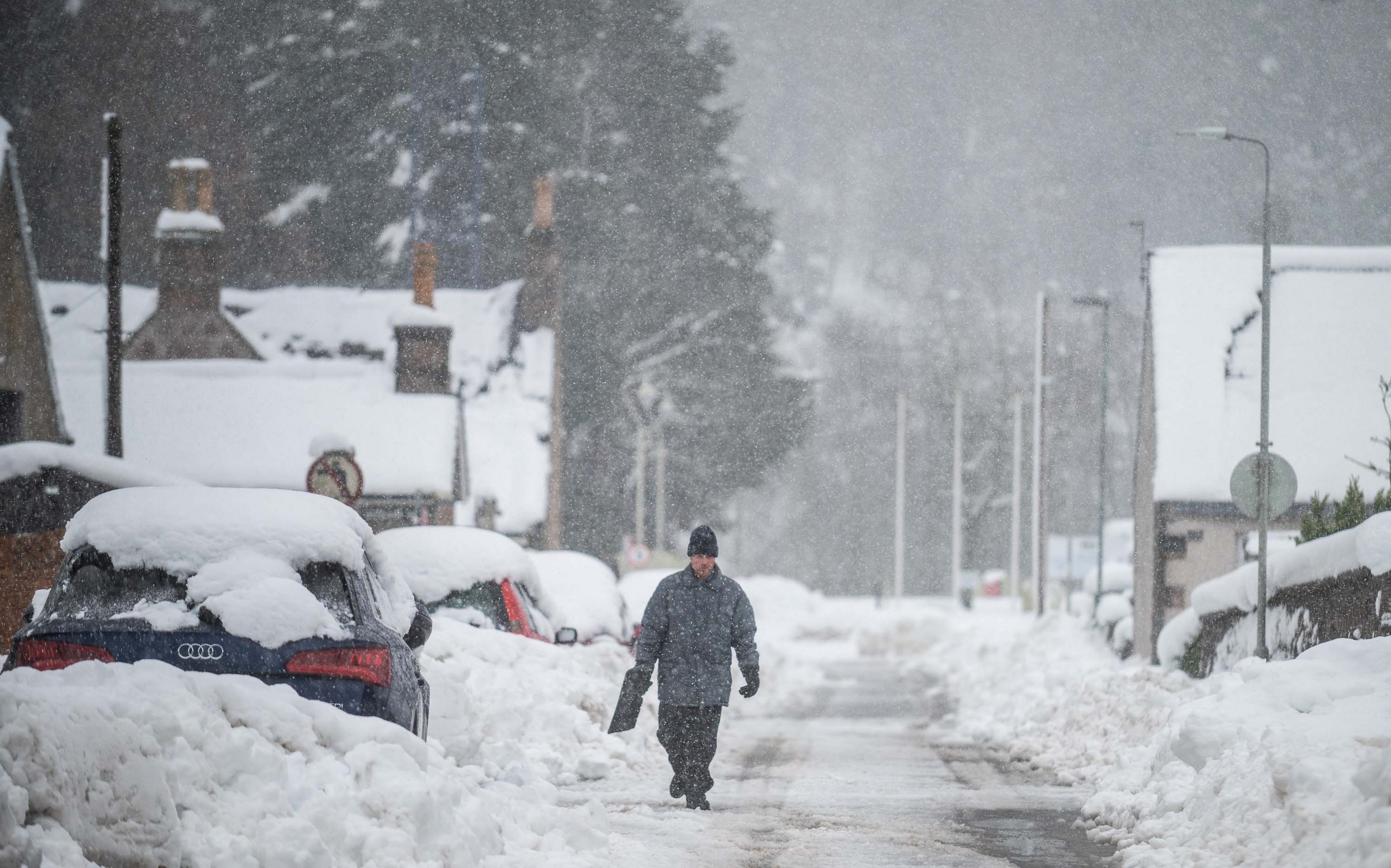 Will the snow settle?

Pics shared on social media show the snow has settled in northern and central Scotland, along with parts of England's north, and the eastern seaboard.