BRITS are braced for “danger to life” flooding today as the Met Office issued “severe” warnings for rain in parts of the country.

The alerts came as forecasters revealed how Japan’s deadly Typhoon Hagibis could impact the UK weather from the other side of the world. 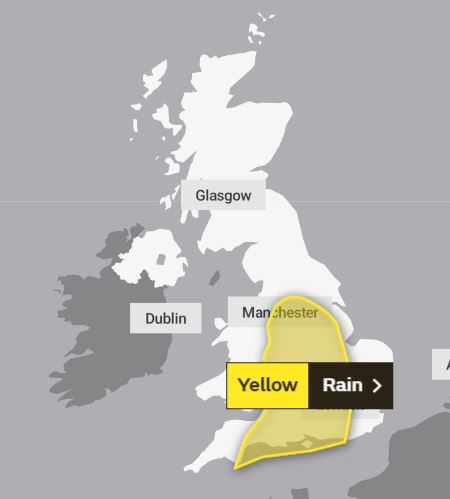 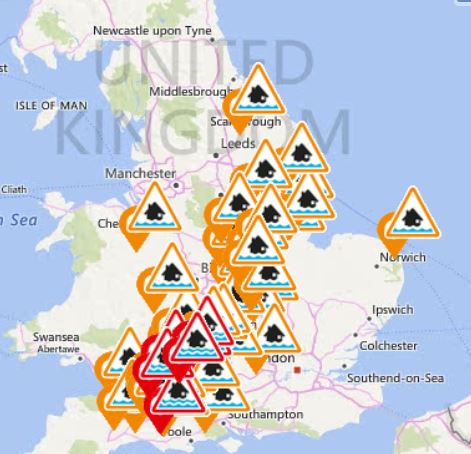 Forecasters warned that more than two inches of rain could fall within 12 hours on Monday in some parts of the country.

The Met Office has issued a “severe” yellow weather warning stretching from Devon on the south coast to South Yorkshire for Monday.

Cities including Manchester, Birmingham, Nottingham, Oxford, London and Portsmouth are also within the warning area.

Homes and businesses could be flooded in the deluge, with a chance of “fast flowing or deep floodwater causing danger to life”, according to the Met Office.

It came as rain as the Met Office revealed how Typhoon Hagibis could trigger more washouts and gales in Britain next week.

Warm moist air from the typhoon will clash with cold air in Russia and accelerate the jet stream, according to forecasters.

Met Office Science tweeted: "As warm moist air from Typhoon Hagibis comes north to clash with a cold front pushing south-east across Russia, the strengthening temperature contrast will accelerate the Jet Stream by 100mph in 48 hours!

"By affecting the jet, Hagibis could influence UK weather next week."

Typhoon Hagibis has unleashed torrents of rain and strong winds that left thousands of homes on Japan's main island flooded, damaged or without power.

At least 36 are believed to have been killed and more than a hundred others injured in the devastating storm.

Although the typhoon is expected to affect Britain’s weather, the impact will be minor compared to the devastation in Japan.

The Met Office said wet weather will move northwards across much of England on Monday, with the heaviest rain forecast for the afternoon and evening.

"This brings a risk of flooding and disruption, but the situation is uncertain, such that the likelihood of this across any given county is small," the Met Office said.

The Environment Agency has issued six flood warnings for England, three of which are for the River Avon in the South West near Bath.

Heavy rain is forecast for the Midlands, northern England and Northern Ireland, with some areas seeing up to 20mm fall throughout Sunday.

Meanwhile, gusts of around 20mph to 30mph are forecast for East Anglia and the North East coast.

SPONSORED CONTENT: How to save £219 a year off your energy bills

BEAT energy price rises year after year with Switchcraft. It's free and it could save you an average of £219 a year.

News UK has a brand partnership with Switchcraft. The £5 will be paid into your bank account within four months of completing the switch. Prepayment meter customer customers will receive a £5 Amazon voucher. Open to those 18 and over. UK residents only. Click here for full T&Cs.

"Heavy rain across England, Wales and Northern Ireland will push northwards throughout the day.

"We have not got any weather warnings out [for Sunday], but the rain could cause [road] surface spray, so that could lead to some difficult driving conditions."

Mr Wilson said the wet weather will push north throughout the day into southern Scotland.

It will be followed by drier weather moving up from the South and South West from the mid-afternoon, Mr Wilson said.

Mr Wilson said the rain will "ease" overnight on Sunday and will be followed by fog patches across England, Wales and Northern Ireland.

Despite more wet weather on Monday, Mr Wilson said there is an "improving picture" for Tuesday, with temperatures reaching up to 16C.

He said while there will be some rain in Northern Ireland on Tuesday, it will be "drier" for the rest of the UK. 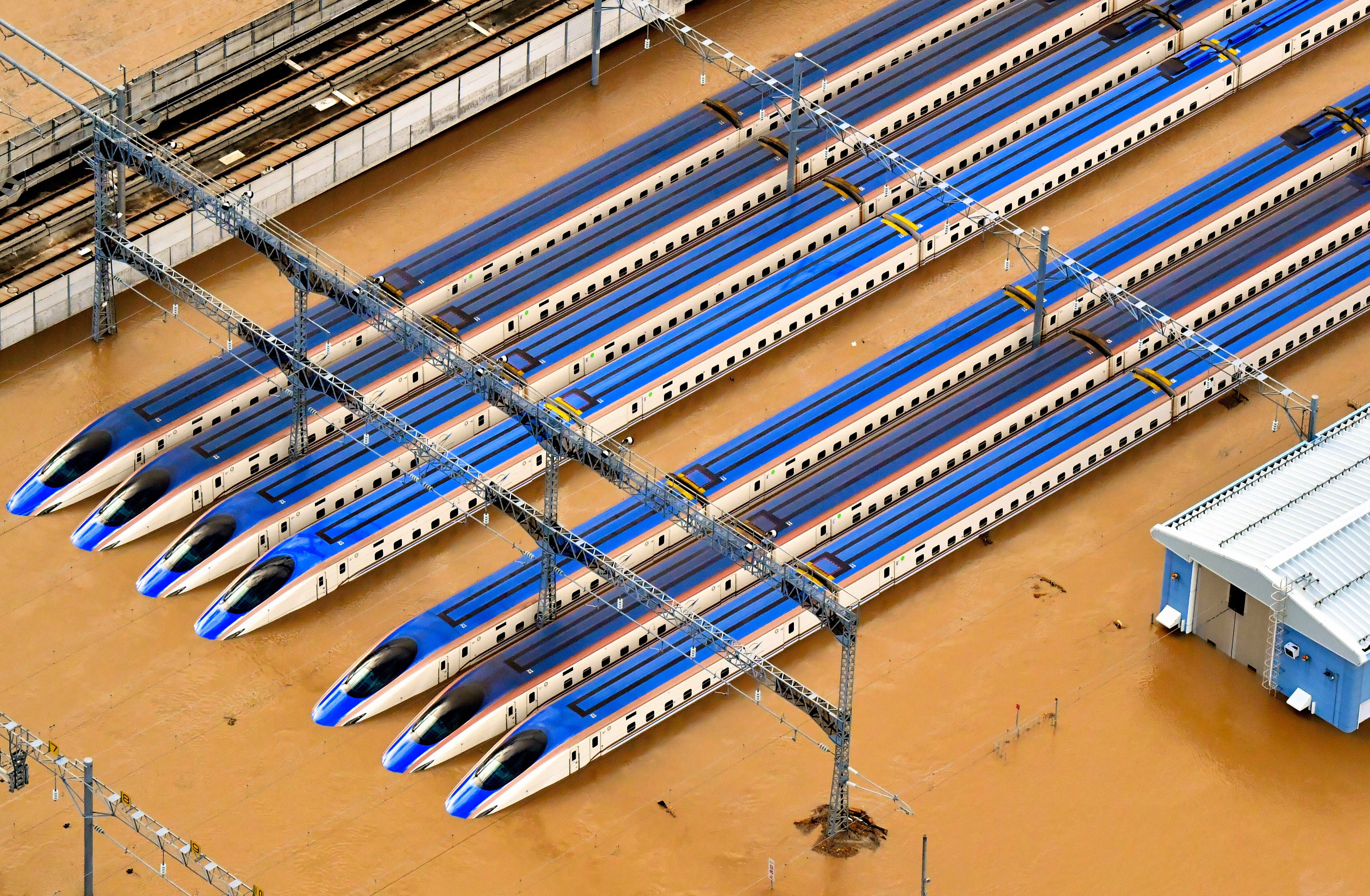 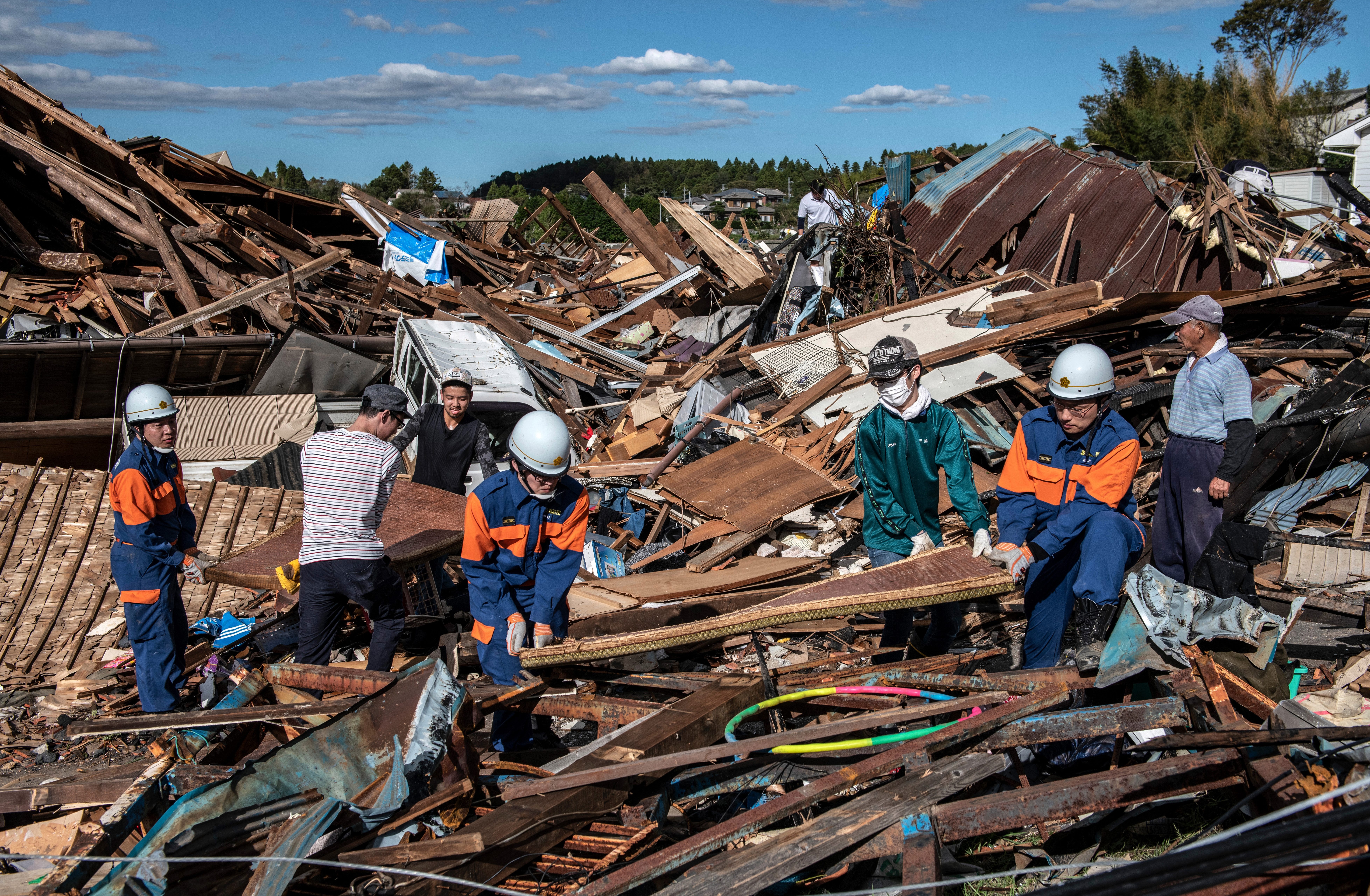