Washington: Joe Biden and Japanese Prime Minister Yoshihide Suga have vowed to work together to push back against China’s “intimidation” of its neighbours during the US President’s first White House meeting with a foreign leader since his inauguration.

The US and Japanese leaders announced a $6 billion commitment to develop next generation mobile networks, an effort designed to ensure Chinese firms such as Huawei do not dominate the playing field on 5G and other emerging technologies. 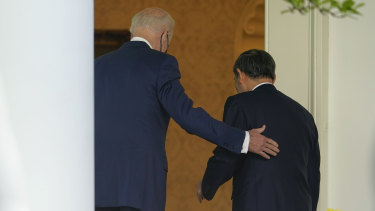 US President Joe Biden, accompanied by Japanese Prime Minister Yoshihide Suga, walk back into the Oval Office after a news conference in the Rose Garden of the White House in Washington.Credit:AP

“We committed to working together to take on the challenges from China and on issues like the East China Sea, the South China Sea, as well as North Korea, to ensure a future of a free and open Indo-Pacific,” Biden said in a ceremony at the White House.

“Japan and the United States are two strong democracies in the region, and we’re committed to defending and advancing our shared values, including human rights and the rule of law.

“We’re going to work together to prove that democracies can still compete and win in the 21st century.“

The White House said that the US had committed $3.2 billion and Japan $2.6 billion for investment in research, development, testing, and deployment of secure networks and advanced information technology. This includes 5G and next-generation mobile networks known as “6G” or “Beyond 5G”. 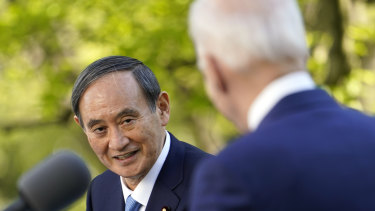 US President Joe Biden, accompanied by Japanese Prime Minister Yoshihide Suga, speaks at a news conference in the Rose Garden of the White House.Credit:AP

The two countries also pledged to collaborate on research into quantum computing and artificial intelligence and to strengthen supply chains for critical materials such as semiconductors.

“Japan and the United States are both deeply invested in innovation and looking to the future,” Biden said.

“That includes making sure we invest in and protect the technologies that will maintain and sharpen our competitive edge, and that those technologies are governed by shared democratic norms that we both share – norms set by democracies, not autocracies.”

Describing the US as Japan’s “best friend”, Prime Minister Suga said the importance of the relationship had “reached new heights” because of the shifting power dynamics in the Asia-Pacific.

“We also had serious talks on China’s influence over the peace and prosperity of the Indo-Pacific and the world at large,” he said.

“We agreed to oppose any attempts to change the status quo by force or coercion in the East and South China Seas, and intimidation of others in the region.” 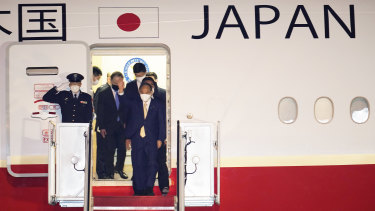 Japanese Prime Minister Yoshihide arriving the US for meetings with President Joe Biden.Credit:AP

Suga said Japan and the US would work closely with Australia and India – the other member of the “Quad” grouping – to promote a free and open Indo-Pacific.

Suga was asked by reporters whether Japan would cancel the Olympic Games, scheduled to be held in Tokyo in July, given the concerns among health experts that the games could become a coronavirus “superspreader” event.

“I told the president about my determination to realise the Tokyo Olympic and Paralympic Games this summer as a symbol of the global unity,” Suga said.

“President Biden once again expressed his support for this determination.”

The day in Washington was otherwise dominated by confusion about Biden’s position on refugee resettlement, after it emerged that his administration planned to keep the US resettlement cap at 15,000 for this fiscal year rather than increasing it to 62,500 as originally promised.

The move sparked an immediate backlash from Democrats in Congress.

Democratic congresswoman Pramila Jayapal said it was “unacceptable and unconscionable that the Biden administration is not immediately repealing Donald Trump’s harmful, xenophobic, and racist refugee cap that cruelly restricts refugee admissions to a historically low level”.

The White House later put out a statement saying that Biden would increase the refugee cap this fiscal year but did not announce a new figure of how many refugees would be resettled.