Victoria in ‘uncharted waters’, urged to trace contacts of contacts

Victoria has been urged to adopt a NSW-style contact tracing technique to help meet its ambitious targets for the easing of restrictions, as the Chief Health Officer warned that the state is in uncharted territory in its fight against COVID-19.

Despite the state recording 15 new cases on Tuesday, including seven yet to be linked to a known outbreak, Chief Health Officer Brett Sutton insisted that the ambitious target of a 14-day average of fewer than five cases was still achievable. 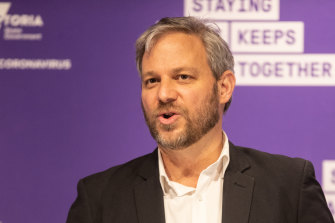 Professor Sutton said Victoria's experience of a brutal second wave of coronavirus, coupled with the national aim of stopping community transmission, was unique and could not be compared with other places around the world that have loosened restrictions with greater daily case numbers.

A cluster linked with a butcher at Chadstone shopping centre in Melbourne's south-east grew by four cases to 28 on Tuesday, including two cases in the regional town of Kilmore where hundreds of residents have visited pop-up testing clinics.

Melbourne’s 14-day rolling average sat at 10.6 cases per day on Tuesday, with 13 "mystery cases" – or cases with unknown sources – in the fortnight to October 3.

Professor Sutton said Melbourne was still on track to slightly ease restrictions on October 19, pointing out that only four confirmed mystery cases have been recorded in Victoria since September 25.

Deakin University epidemiology chair Professor Catherine Bennett told The Age and Sydney Morning Herald on Tuesday that the government should adopt a contact tracing technique deployed during some NSW outbreaks, including the recent Crossroads Hotel cluster, to quickly limit the spread of the virus in incidents such as the Chadstone outbreak.

Vietnam, which has recorded just 1097 cases since the pandemic began, instantly asks contacts of known contacts to isolate.

"I'm a strong believer that you do a rapid response and go to contacts of contacts. You ask them all to stay in quarantine until you know it's safe," Professor Bennett said.

"That's where you err on the side of caution, in dealing with outbreaks. It's incredibly conservative to have the restrictions we do but we're not being conservative enough in our response to outbreaks."

Professor Sutton said the approach was already used to manage outbreaks in high-risk settings such as aged care and authorities were looking into expanding it to all cases.

But Professor Bennett also said Victoria's targets of a 14-day average of five cases a day, plus five or fewer mystery case in the preceding fortnight, were unnecessarily ambitious.

She said Victoria allowed home visits at a 14-day average of 10.8 on May 12, and the state went on to eliminate the virus in the next weeks before hotel quarantine breaches introduced a new strain of COVID-19 in late June.

“I think more focus should be on the public health management and outbreak responses.”

Professor Sutton said Victoria's second wave was “10 times as hard as the first wave” and was unique worldwide.

"I don't think anyone really understands what a gargantuan task the contact tracing has been through this wave," he said.

“But we’re also in that unique position of being able to potentially stop community transmission altogether.”

After MPs pleaded with the South Australian and NSW governments to reopen their borders to regional Victoria last week, South Australia took its first step on Tuesday, announcing its border "buffer" zone with Victoria will extend from 40 kilometres to 70 kilometres.

Following the October 19 deadline for fewer than five cases a day, Victoria's next threshold to further lift restrictions in November will be zero cases of community transmission over a fortnight, which Professor Raina MacIntyre, head of the biosecurity program at UNSW's Kirby Institute, said was feasible and necessary.

"The numbers have come right down. It may be achieved soon and I think that's a very reasonable goal," she said.

"The problem is there's only a couple of months before we get into Christmas and New Year season, where there will be gatherings and increased risk of community transmission. I think it's really important Victoria can go into the holiday season with confidence."

While Premier Daniel Andrews said the Chadstone cluster "speaks volumes to the infectivity" of COVID-19, Opposition Leader Michael O'Brien called it another failure of contact tracing.

"This is a government that has just failed to get contact tracing right. It was only a couple of weeks ago Daniel Andrews promised Victorians we’d caught up to NSW, in fact he said we were past them," Mr O'Brien said.

"That’s clearly not the case. The only reason Victoria isn’t currently able to open up and get rid of some of these onerous restrictions is because the government has failed to do its job on contact tracing."