Ukrainian President Volodymyr Zelensky took to Instagram yesterday to hail the Daily Mail for its coverage of Ukraine.

The Mail’s Saturday front page, which splashed ‘Kyiv, the city of courage’, was the first paper he chose to include in a series of images from UK newspapers shared on social media.

The post, which had more than 750,000 likes and nearly 22,000 comments, also included the front pages from the Daily Mirror, The Sun and The Daily Telegraph. 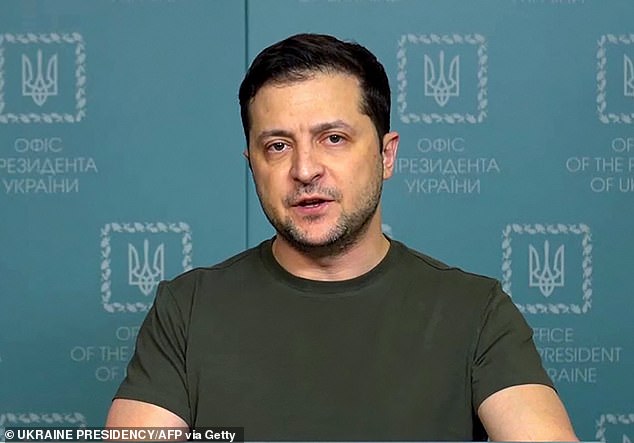 Ukrainian President Volodymyr Zelensky, 44, has won praise for his defiance in refusing to leave Kyiv

Alongside the post, he wrote: ‘The whole world knows the truth.

‘All the world hears it. The entire world is behind us and we can feel it.’

President Zelensky has won praise for his defiance in refusing to leave Kyiv.

The president, 44, has posted daily videos on his Telegram account of him providing updates while dressed in military uniform.

His refusal to leave the capital has come despite claiming he was being targeted by Russian special forces.

Earlier this week he said: ‘I am target number one, my wife and children are number two.’