More than four in 10 voters want to see a No Deal Brexit on October 31 if the EU does not give way on a better Brexit deal, a new poll suggests.

Some 43 per cent said that the UK should unilaterally quit on Halloween if Boris Johnson fails to get any concessions from European leaders beforehand.

But 32 per cent disagreed with the idea and a full quarter (25 per cent) of those polled by ComRes for the Daily Telegraph did not know, showing the division that remains over the contentious issue. 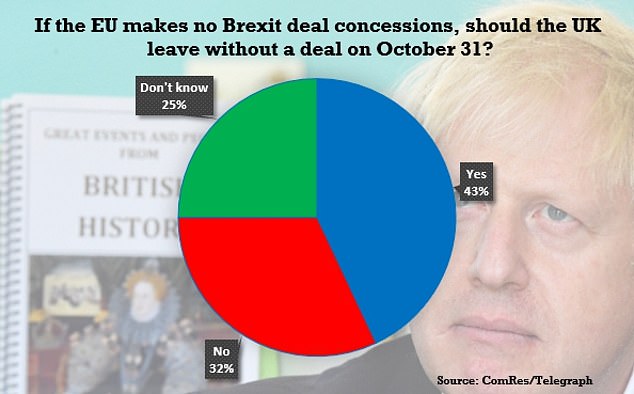 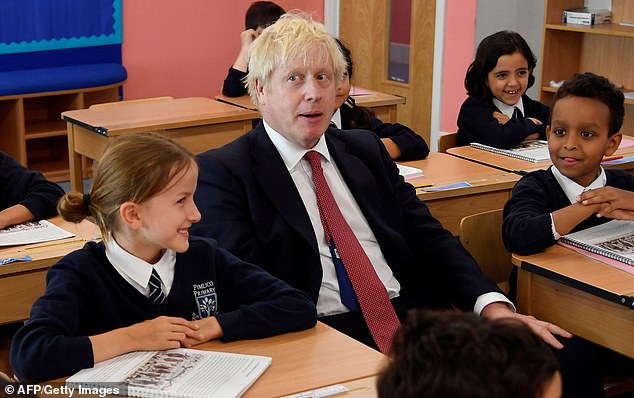 Mr Johnson (pictured in London yesterday) should try to get the UK out of the EU on October 31 if Brussels will not make deal concessions, voters said

Almost half (49 per cent) were against a Brexit extension to January 31, but it was backed by 29 per cent, with a further 22 per cent undecided.

However, 48 per cent just wanted Brexit uncertainty to be over and did not care how this was achieved.

There was also strong division over whether Mr Johnson should embark on an election pact with Nigel Farage’s Brexit Party, with voters split 36 per cent to 34 per cent for and against the idea.

Angela Merkel delivered an apparent boost for Boris Johnson today by saying there was ‘every chance’ for Brexit to be ‘sorted out’.

The German Chancellor gave the upbeat assessment amid signs of a renewed push in negotiations, with just 50 days until the UK is due to leave.

Asked in the Bundestag for her view on the prospects for Brexit, Mrs Merkel said: ‘There is every chance to get it sorted out.’

The comment – which was immediately seized on by ministers – come amid claims Mr Johnson is ready to compromise on his Irish backstop demands.

Instead aides are believed to be examining proposals for arrangements that would apply only to Northern Ireland, rather than aligning the whole UK with EU market rules.

That could raise tensions with the DUP, which has insisted it will not accept anything that risks splitting the union.