Wanted: someone who can fix the Taj Mahal

Delhi: Foreigners, Australians among them, are eyeing up an opportunity to help save the Taj Mahal from pollution after India's Supreme Court ordered the government to search abroad for experts to stem the damage to the building.

The white marble 17th century icon in Agra is pock-marked with brown and grey patches. Last Tuesday, two Supreme Court judges, on seeing the latest pictures, threw up their hands in despair at government apathy. 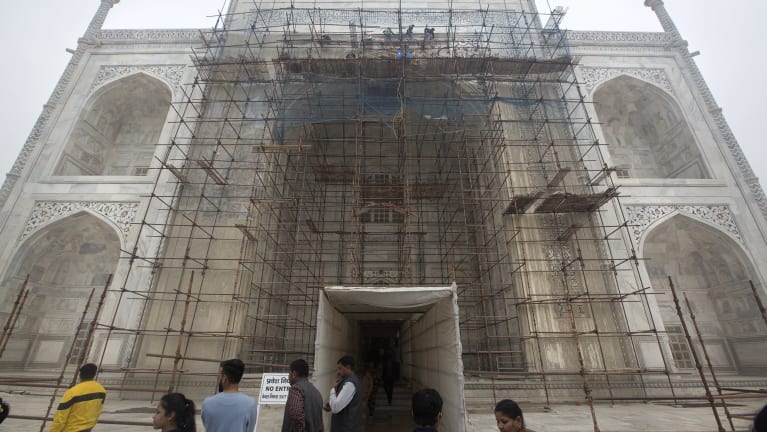 Indian workers clean discoloration on the Taj Mahal in December.

"Earlier it was turning yellow and now it is becoming brown and green … it seems you are helpless," they said.

"You can get help from experts from outside to assess the damage done and restore it. There seems to be lack of will and expertise," was how the two justices rebuked the authorities.

The remarks were a damning indictment of the failure of the Archeological Survey of India, entrusted with running the country’s monuments, to protect the mausoleum against two main threats: primarily the smoke from nearby industries but also from the millions of mosquito-like insects from the nearby Jamuna River. The river is so filthy that it attracts insects who excrete their faeces on the facade.

Mughal Emperor Shah Jahan built the tomb for his favourite wife, Mumtaz Mahal. The building attracts up to 50,000 tourists a day from around the world. Despite earlier efforts by the courts to limit the damage from pollution, the discolouration continues. And with a World Health Organisation report on Wednesday finding that 14 of the 15 most polluted cities in the world were in India, the damage is likely to continue.

The suggestion to bring in foreign experts is likely to go down badly in patriotic circles. But there are precedents.

"The current way of handling this kind of situation is a mechanism under UNESCO. When a monument is seen to be at risk or badly managed, it is put on the 'List of World Heritage in Danger'. But action cannot be taken independently. It has to be done in conjunction with state actors,’ explained Paul Rappoport, director of Heritage21 in Sydney.

Asked if his company would, if called on by India, take up the job, Rappoport replied: "We’d be happy to because we are registered with UNESCO and so if UNESCO took it up, we would get involved."

Despite the complexity of the problem, including pollution from brick kiln furnaces and dust from construction sites, Rappoport was confident measures could be taken to arrest the damage.

"There are ways of applying a substance on the facade of the monument to hold off the damage, at least in the short term," he said. 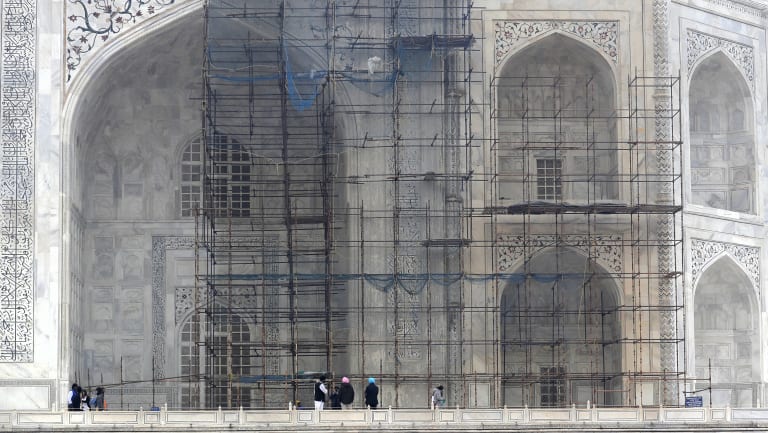 Tourists walk past a discoloured wall of the Taj Mahal caused by environmental pollution which stands out in contrast against one which has been cleaned.

A precedent for foreigners conserving Indian heritage has already been set by the Geneva-based Aga Khan Trust for Culture which has restored the beautiful tomb of another Mughal emperor, Humayun, in New Delhi and is currently restoring other monuments.

"As with other world heritage sites, there would be plenty of precedents of forming an international team of experts to tackle challenging conservation and preservation issues, ideally with the involvement of the national government and local experts and artisans," Melbourne University Professor Hannah Lewi said.

Ian Travers, president of the Australia office of the International Council on Monuments and Sites, said whilst Australian practitioners did work across the globe, there was "sufficient expertise in India" to address the staining.

The Taj Mahal is at the centre of another controversy because it features on a new list of almost 100 heritage sites the Indian government has put up for "adoption" by private companies. Called Adopt a Heritage, the idea is that private companies will maintain and improve the facilities around national monuments in return for certain branding benefits. 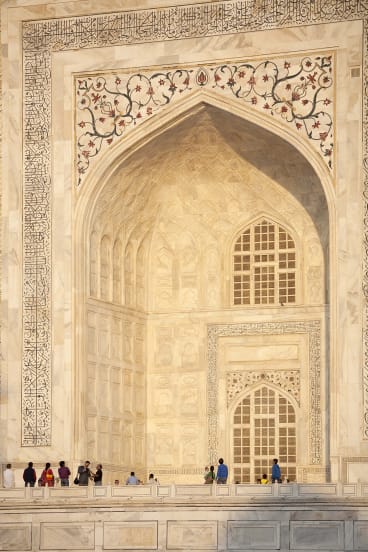 Late afternoon light on the marbled western facade of the Taj Mahal highlights some of the discoloration.

The scheme is a reaction to the sad state of most heritage sites. Even the most historically important and most beautiful are not spared. A smelly mess of ambling cattle, rubbish, dirt, stray dogs, graffiti, defaced walls and men peeing against nearby walls is what visitors confront at several attractions. Facilities taken for granted around the world at similar sites – cafes, benches, toilets, souvenir shops, taxis – are non-existent.

Critics of the scheme are shocked that even the Taj Mahal is on the list. They argue the heritage of a country belongs to the people and should not be linked to the interests of a private company. Historian William Dalrymple who is based in India, tweeted: "Major historic monuments are a nation’s crown jewels. They should not be played around with."

But supporters of the adoption scheme are convinced it is the only way to save India’s heritage. Journalist Shekhar Gupta pointed out in a column that Italy has already chosen the same route. "Cash-strapped, its government has been handing out sites to corporates, mostly the fashion brands, for restoration and upkeep, in return for branding opportunities. Tod’s has the Colosseum, Diesel the Rialto Bridge in Venice. When you go to the Trevi Fountain next, look for the logo of Fendi, and Prada’s at Venice’s big [Doge] palace,’ he wrote.

Rappoport disagrees, saying that handing over a monument like the Taj Mahal to a corporation raises problems of governance and custodianship.

"It reduces an important monument to the status of a commodified product. Of course the monument gets restored but then it becomes, through the company’s branding, not a monument of India but something that belongs to Revlon or Armani or the Indian equivalent.

"The Taj Mahal belongs to India and the government should protect it for the Indian people."