When enemies become friends: How a prisoner of war found his Aussie home 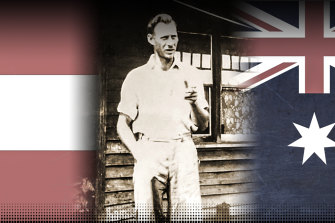 Rudi Pruckner wearied of his long years as a prisoner of war at Murchison, Victoria.

He had taken a long look at the Australian countryside around the prison camp, and had taken to talking with the Australians charged with keeping him imprisoned. He decided he didn’t want to return to the country that had sent him to war. His Australian military guards sympathised.

And so began one of the strangest prison breaks in Australia’s history – one a magistrate later decided was a demonstration that the Australian sense of the fair go could be extended even to enemies of war.

Pruckner himself, while on the run, built a deep love of the remote stone country around Lake Condah in south-west Victoria – a place now known as the Budj Bim World Heritage site – that would stay with him for the rest of his life. 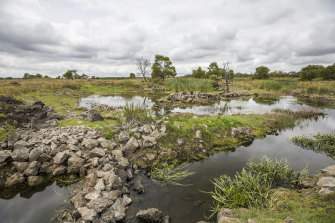 The Australians who helped him escape and arranged for him to hide out in an old bush hut were to remain lifelong friends, too.

Pruckner was a young Viennese, drafted into the German Werhmacht’s 2nd Panzer Division in the early days of World War II. He was captured during the short-lived Battle for Greece of April, 1941, when an overwhelming force of Germans invaded and took just 27 days to drive out of Greece the Commonwealth forces of Australia, New Zealand and Britain.

But as they withdrew south through the cold mountains towards the Peloponnese peninsula, Australian and New Zealand soldiers fought several fierce rearguard actions. Rudi Pruckner’s unit was reduced, he would tell his family decades later, from about 600 troops to just 150 in a single battle. He was taken prisoner.

As allied troops escaped Greece and many found themselves under new attack in the chaotic hell of Crete, Pruckner and other German POWs were transported to makeshift prison camps in the Middle East – the start of a long journey that ended across the other side of the Earth, in Australia.

On August 25, 1941, Rudolph Pruckner marched into Number 13 Prisoner of War Camp, Murchison. It was his 21st birthday.

The Murchison POW camp in the Goulburn Valley, about 35 kilometres south of Shepparton, was the largest in Australia. It held about 2000 captured Italians, 1300 Germans and at one point, 185 Japanese. 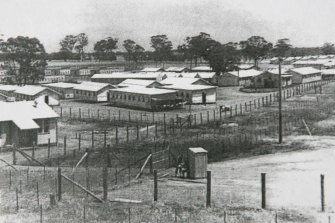 The prisoner of war camp in Murchison.Credit:Paul Harris

While bitter war raged across Europe, the Middle East and spread through Asia and into the Pacific and Indian oceans and Oceania, taking millions of lives, most of the prisoners at Murchison led a pretty peaceful existence.

Rudi Pruckner took to working in the kitchen alongside Australian cooks. He decided to teach himself English, allotting himself 10 new words a day. One of the guards, a young Australian named Donald McDonald, helped out on the understanding that in return, Rudi would teach him German.

Among other friends he made was a cook from far south-west Victoria named Norman Vaughan. Vaughan was from a large farming family, and one of his brothers, Roy, was a military guard at Camp 13.

The war was finally over when Japan surrendered on September 2, 1945. But Rudi Pruckner and thousands of others remained officially Prisoners of War in Australia clear through 1946 and into 1947.

Pruckner began to grow increasingly apprehensive about being repatriated to Austria. Australia had, in a way, become his home, and he wanted to experience it beyond the barbed wire.

His guards hatched a plan. McDonald dressed his enemy-friend in his Australian military uniform and together they walked out the front gate where a taxi had been arranged to take them to the Seymour train station. They travelled to Melbourne and Pruckner found himself treated to a night at the grand Federal Hotel, since demolished.

Others, it would later become obvious, were in on the plot. A former guard named Haig linked up with McDonald and Pruckner in Melbourne, and another named Andrew Thompson fitted into the scheme. Norman Vaughan, Pruckner’s fellow cook, and his brother Roy, the former guard, became crucial to ensuring Pruckner got away.

The Vaughan family owned land in an area known as Breakaway Creek, alongside the old Aboriginal mission at Lake Condah. Arrangements were made to send Pruckner by train from Melbourne to the railway siding at little Condah, about halfway between Hamilton and Portland.

In a stroke of immense fortune, the young Austrian – without a clue where he was – stopped a man driving a horse and cart soon after alighting from the train. He asked if the man knew “Mr Vaughan”.

“Which Mr Vaughan would that be?” said the horseman. “There’s a lot of us. I’m Charlie Vaughan.”

And so, the escaped prisoner of war was given shelter in a bush hut known as “Murphy’s” on Roy Vaughan’s family property, on country that had been home to Australia’s First People for many thousands of years.

Rudi Pruckner did not know it, but a soldier who would become Australia’s first Aboriginal military officer, Reg Saunders, was raised at the mission on Lake Condah, a few hundred metres from Murphy’s Hut. Saunders, who fought with the 2/7th infantry battalion, was one of those soldiers fighting rearguard actions against German units during the withdrawal from Greece in April 1941. 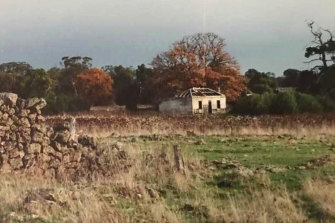 Murphy’s Hut, Lake Condah before it was demolished.

While Pruckner was taken prisoner and sailed away from Greece to Egypt, Reg Saunders was one of about 3000 Australians who became stranded on Crete. He evaded capture by the Germans for 12 months with the assistance of Cretan citizens who risked and often lost their lives in granting shelter to those on the island.

And so, we might ponder on a new Anzac Day, the strange, often terrible and sometimes benevolent fortunes of war.

Pruckner, with the assistance of the family of his former prison guards and re-named by Roy Vaughan as “John Thomas”, lived in Murphy’s hut for six carefree weeks, helping milk the family’s cows, hunting rabbits and absorbing the landscape.

One night, he and his hosts grew too bold. He attended a dance in a nearby town, and Roy Vaughan’s claim that he was a Dutch soldier on leave didn’t wash with a suspicious local.

“John Thomas” was awakened at Murphy’s Hut the next morning by troopers. He was carted off to the lock-up at nearby Macarthur, where the policeman’s wife cooked him a hot meal he remembered forever. Back at Murchison, Pruckner was given 21 days’ solitary confinement.

“You, as Australians, have the inherent virtue of sympathy. Pruckner has impressed me with being a good type of man and would probably make a good citizen.”

Donald Henry McDonald and Andrew John Thompson, each aged 19, and Norman Stanley Vaughan 25, were charged with aiding the escape of a prisoner of war under the National Security regulations. The story was laid out in evidence before the magistrate, G.S. Catlow, sitting in Shepparton.

A lawyer for two of men, J.R. O’Keefe, essentially argued his clients had done an honourable act.

“There is that thing in the Australian bloodline that would assist a man when he is down rather than put the boot in,” he told the magistrate, as recorded in the Shepparton Advertiser on December 6, 1946. The magistrate agreed, placed the men on two-year good behaviour bonds and all but gave them – and Pruckner – fine character references.

“You three have committed what I consider a very serious offence,” he began. “However, you, as Australians, have the inherent virtue of sympathy. Pruckner has impressed me with being a good type of man and would probably make a good citizen.

“In this country. I have addressed my mind as to whether you would have done this act if he had not been such a decent type and I don’t think you would have.”

Rudi Pruckner was sent home to Austria. Within a few years, though, he had returned to Australia. The Vaughan family assured the authorities they would have work for him if he needed it, and another former guard from Camp 13, Steve Duck, arranged sponsorship and gave him a room in his family home in Coburg. 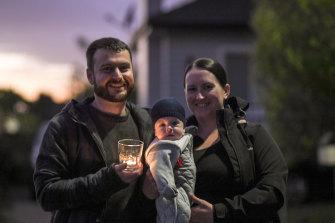 Pruckner met the woman who would be his wife, Joyce Underwood, through mutual friendship with Roy Vaughan. They had three children.

And every holiday, the entire family travelled to Breakaway Creek, stayed with the Vaughans and had picnics at Murphy’s Hut.

“We loved those holidays,” says Rudi’s son, Shane, who is writing a book on his father’s experiences.

The book is being co-authored by his friend Mick Thomas, of the band Weddings Parties Anything. Thomas has been fascinated by the story ever since Shane showed him an old picture of his dad decades ago. It prompted him to write the song Away, Away for the band’s first album.

Murphy’s Hut was demolished years ago, before the land was returned to the traditional owners, the Gunditjmara people. The Gunditjmara have preserved part of the old ruin as a shelter on the World Heritage Budj Bim trail.