With a little help from their friends, more women are hitting the path to politics

For businesswoman Carol Schwartz, the fact there was only one woman in Tony Abbott's cabinet in 2013 — foreign minister Julie Bishop — was simply not good enough.

"I'm a strong believer that our parliaments should represent what our society looks like," says the Reserve Bank director, property heavyweight and philanthropist. "Women are just over 50 per cent of our society so it seems nuts to me that we don't have that political representation." 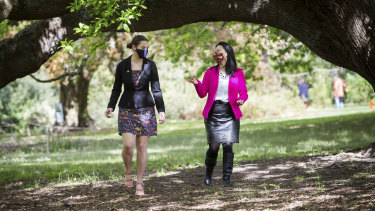 Nakita Thomson and Wesa Chau are among 17 women running in October’s council elections who have come through the Pathways to Politics for Women program initiated by Melbourne businesswoman Carol Schwartz.Credit:PaulJeffers

Having learned of the Kennedy School's From Harvard Square to the Oval Office that helped to equip American women for a run at politics, the dynamic Ms Schwartz got the University of Melbourne on board with starting a similar program aimed at boosting the number of women running for any level of Australian office.

The pilot for the Pathways to Politics for Women program, funded in part by Ms Schwartz's family Trawalla Foundation, was launched by Ms Bishop and Labor’s Tanya Plibersek in Federal Parliament in 2016.

No less than 17 current or past "P to P" participants from across the political spectrum are standing in October's council elections.

I'd been working in Uganda, where they had … 40 per cent of women in their Parliament in 2015 – Australia had just 29 per cent.

In 2017, Susanne Newton, a former aid worker, found herself both participating in the program and putting the skills she was learning in it into practice in real time as she campaigned for Darebin council.

"I'd been working for UN Women in Uganda, where they had quotas for women MPs, and had 40 per cent of women in their Parliament in 2015 — Australia has just 29 per cent," said Ms Newton, who is running for council again.

"When I came back to Australia and saw there were two women and seven men on the local council, for me it was very much about wanting to redress that balance."

Confidence was one of the key things she picked up from female politicians she met in the Pathways program. "Pretty much every woman MP would say: 'It's really hard, and this is why it is hard and what happened to me but you should do it anyway'," said Ms Newton, now a mentor in the program.

Paediatrician professor Katie Allen had no intention of entering politics but realised after a long career in medical research and preventive health, she wanted to help "fix the system" from within. 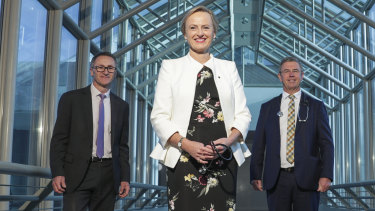 Professor Katie Allen, the federal member for Higgins (with other medico MPs Richard Di Natale and David Gillespie) did the Pathways to Politics for Women program in 2018.Credit:Alex Ellinghausen

She did the Pathways program in 2018. As it progressed, she decided to run at the same time for the seat of Prahran in the Victorian election. Having been "mowed down" did not deter Ms Allen, who won preselection for Kelly O'Dwyer's former federal seat of Higgins in 2019 and entered Parliament that year.

Ms Allen says the Pathways course, at which she returned to speak this year, offers vital support: "It's really important for women to have role models, and those role models have been missing [in significant numbers]."

Wesa Chau, of Labor, who went through the 2015 Pathways pilot and is standing for deputy lord mayor of Melbourne, says the program is also helping boost cultural diversity, "putting those voices at the centre of decision-making when too often we see people making decisions without them".

She agrees with Ms Schwartz that the non-partisan nature of the program is part of its value because it helps women who could potentially face each other off find common ground. "Yes, we might have differences when it comes to how we run the country … but there are certain things that are common to all women, so it's good to have that support."

Tina Kuek, a policy advisor in the Department of Justice, says attending the program reinforced her sense that she had what it took to run. "It helped me a lot," says Ms Kuek, "I was already involved in the community … and it showed me there was nothing to say I can't put my hand up to run for council."

"Sometimes we think, 'I'm not ready yet, I'm only 26', we doubt ourselves, but I am ready, very qualified and already have a diverse range of skills."

Green Nakita Thomson, an urban planner and Melbourne City Council candidate, says she is a "hesitant politician" but felt compelled by climate change to get into the race.

At 24, she says having older, more experienced political women around her — some of whom are from other parties she has met through the program — has helped with some of the downsides of running for any office, such as gendered social media attacks.

"You can share the hate comments and laugh about them … having allies across parties is really valuable both to mental health and in trying to keep your spirits up and stay in politics. Because there are plenty of women who left it due to sexism."