Wolfgang Van Halen, Valerie Bertinelli rail against ‘Heartless’ documentary on Eddie Van Halen’s death: ‘F— you if you watch it’ 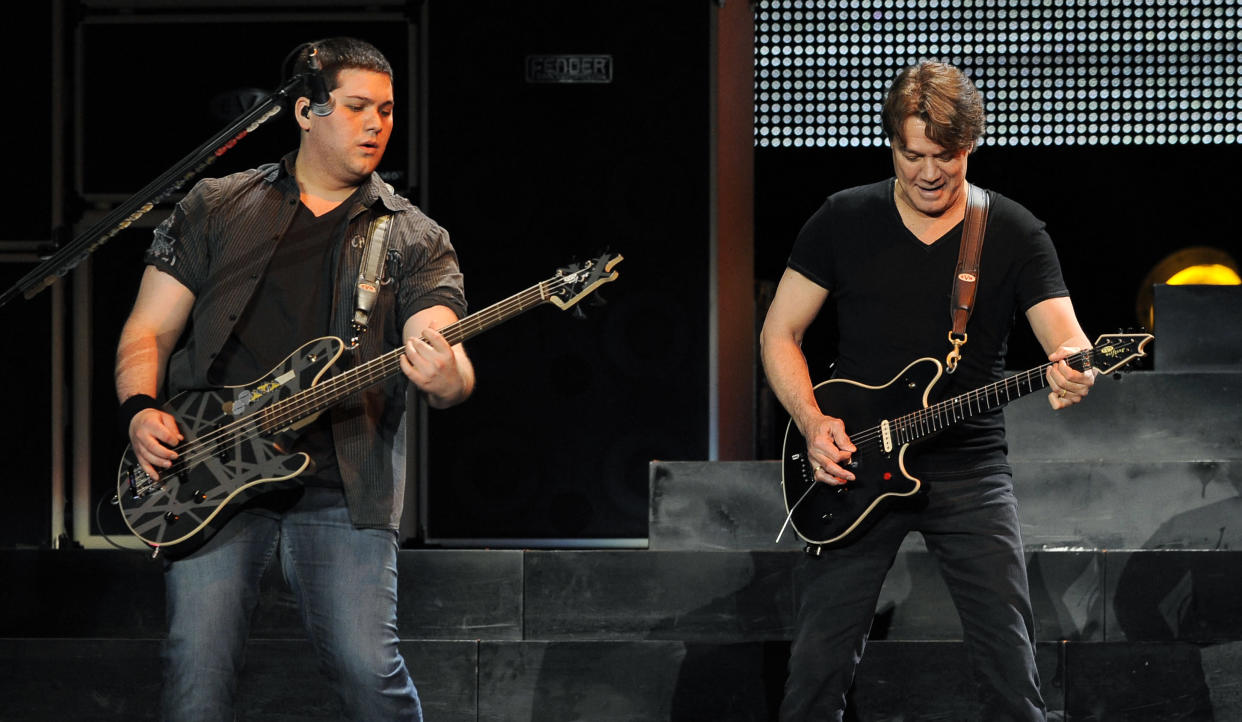 Wolfgang Van Halen is not pulling any punches when it comes to an impending TV documentary special about the death of his father, Eddie Van Halen, calling it “pathetic and heartless” and wishing a pox on everyone who created the doc or even plans to tune in.

“Fuck Reelz Channel, fuck everyone that works on this show, and fuck you if you watch it. Fucking disgusting trying to glamorize someone’s death from cancer,” tweeted Van Halen, 31.

Under her user name @Wolfiesmom, Valerie Bertinelli, Eddie Van Halen’s former wife, responded to Wolfgang’s tweet with her own shorter thought on the special: “Good Christ this is disgusting.”

Wolfgang played bass alongside his guitar-hero father in the band Van Halen from 2006 forward. Eddie Van Halen died in October 2020 at age 65.

An official description of the show promises: “If caught early Eddie’s disease had reasonable survival rates, so what exactly happened? Now renowned forensic pathologist Dr. Michael Hunter will analyze every detail of his life in order to piece together what else may have been going on in his body, ultimately leading to his untimely death.” The announcement noted “a darker undercurrent that would plague Eddie throughout his life” and makes note of his stints in rehab as well as alleged workaholism.

Fuck @ReelzChannel, fuck everyone that works on this show, and fuck you if you watch it. Fucking disgusting trying to glamorize someone’s death from cancer. Pathetic and heartless. https://t.co/84BE5rx81C

The Realz Channel’s Twitter account is attracting some opposition from rank-and-file Van Halen fans. The account’s most recent retweet about the show has 34 replies as of this writing, all of them slamming the channel. Among the replies: “Hard pass .. let him RIP.” “I for one (am) waiting for ‘Autopsy: The Death of Reelz Channel’ more than anything.” “You pigs. Just blocked your channel from my cable box.”

Wolfgang Van Halen has been busy recently as a solo artist. In 2021, he released an album, “Mammoth WVH,” that included the song “Distance,” a tribute to his late father. The tune was nominated for a 2022 Grammy for best rock song, with the younger Van Halen competing against Paul McCartney, Foo Fighters, Weezer and Kings of Leon.

Wolfgang told Variety in an interview that he was able to play his father the song before he died. “He cried when he first heard it,” said Wolfgang. “It was a really special moment that I’ll never forget.” He spoke of creating a video for the tune that was released last summer: “I wanted to show what an amazing father he was, and not just the guitar player everyone thought. … It was important for me to show that human side, which no one could imagine after he’d reached this sort of deity status. At the end of the day, we’re all just people, man.”

Although Bertinelli and Wolfgang’s father divorced in 2007, the actress wrote in her memoir, published earlier this year: “”I just don’t feel like I’ve ever been loved like that, in that way, from anybody else. I just feel a connection with Ed that I’ve never really felt with anyone else.”