MAN’S best friend can also be the most dangerous with maulings and bites from rabid dogs to blame for the 25,000 deaths every year.

And many people who survive canine attacks are left with appalling life-changing injuries. 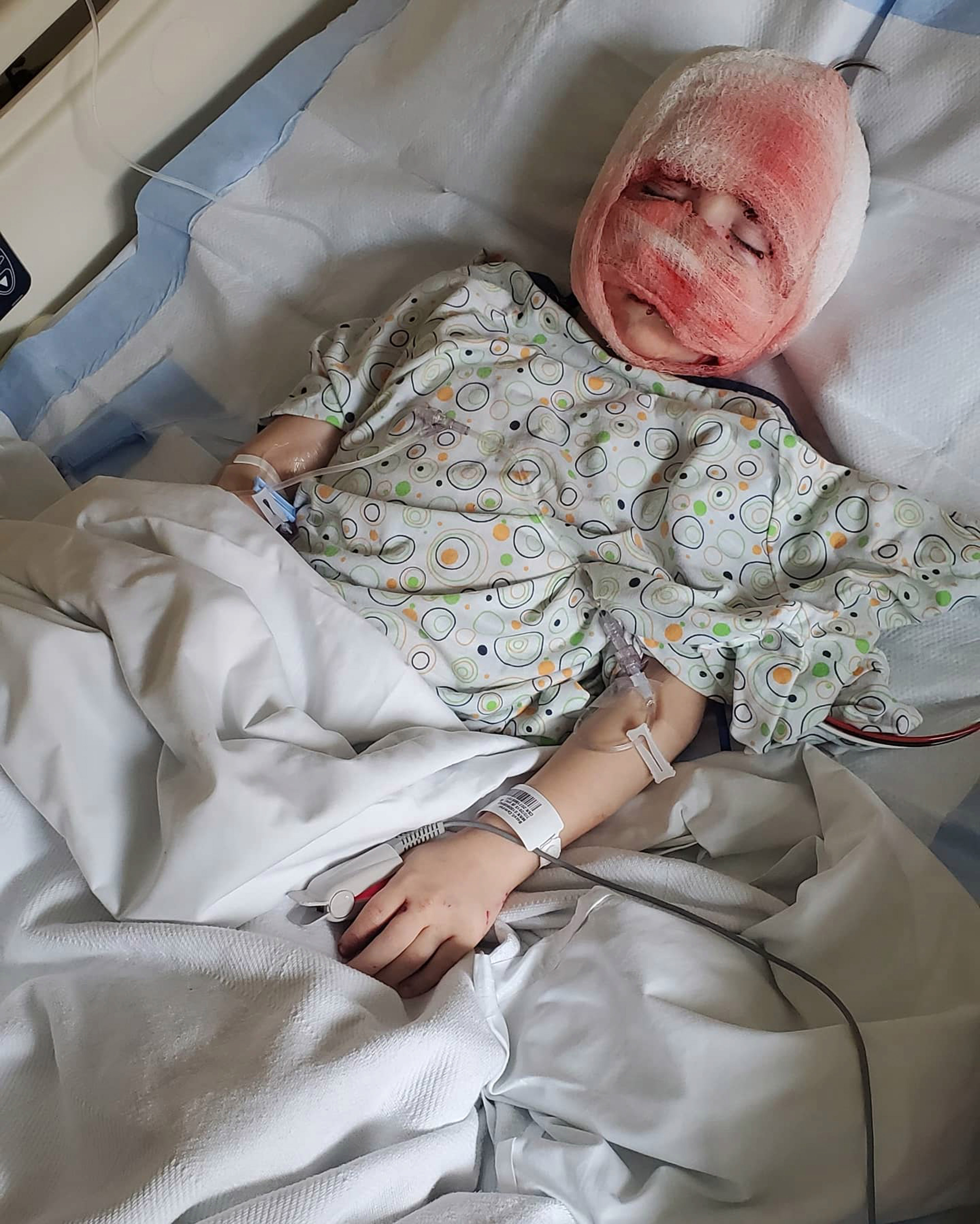 When dogs strike, their bite is most definitely worse than their bark.

In the UK there are 250,000 hospital admissions annually, according to UK statistics.

The US, which has four times the UK's population, has recorded about 4.7million dog bites every year.

Most are minor and can be quickly cleaned and stitched.

But horrific pictures reveal the awful outcome after loyal companions turn on their owners or randomly attack strangers.

Faces, fingers and lips or eyelids can be ripped off in an instant when dogs go bad. 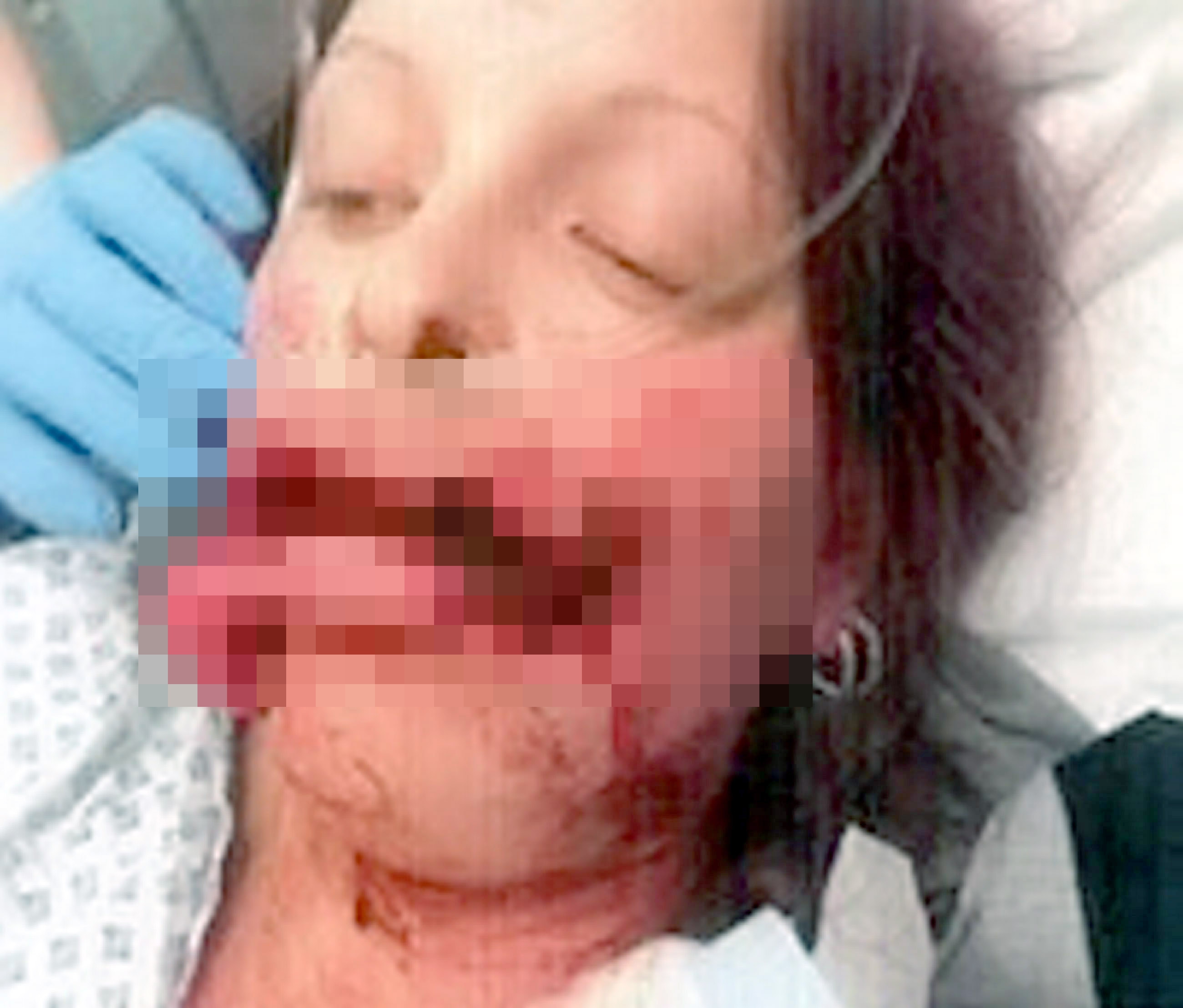 The 21-year-old, who was seven months pregnant, was left scarred for life in 2014 after a raging seven-stone American Akita ripped her face apart

Dog owner Tracie Taylor became the first person in the UK to be prosecuted under tough new laws following the mauling.

Taylor, 49, was handed a 16-week suspended prison sentence after she admitted "having a dog dangerously out of control".

The dog previously attacked someone else in 2009 but Taylor escaped prosecution because it did not happen in public.

It pounced on Laura just 24 hours after cops were given new powers to charge irresponsible owners.

She needed more than 60 stitches in her face and needed emergency surgery after the mauling at a house in Nottingham.

The injuries were so severe Laura had to give birth by caesarean section. Doctors were worried she could not cope with the pain of labour.

She still had trouble eating and drinking and faced years of further corrective surgery on her horrendous facial wounds. 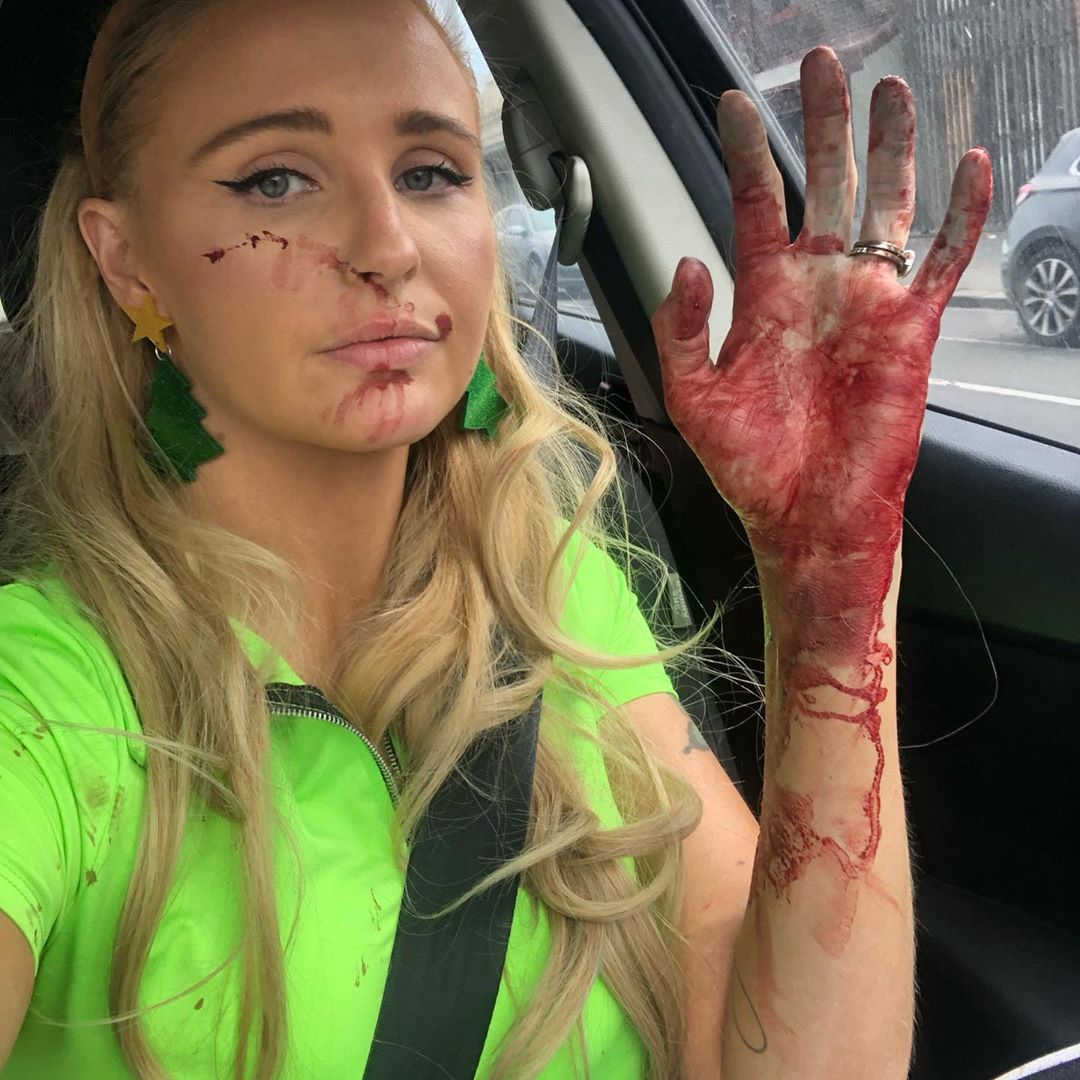 An Australian AFL WAG and blogger suffered gruesome injuries and required a blood transfusion after she tried to stop a vicious dog fight.

Annie Nolan, the wife of retired Western Bulldogs star Liam Picken, was driving in Melbourne when she spotted a small white dog being mauled by a larger animal.

She jumped out of the car and attempted to separate the fighting canines, but was bitten on the hand in the process and rushed to hospital.

The mother-of-three has since shared graphic photos of her hands, face and clothes covered in blood.

She required a blood transfusion to avoid nasty infections.

Her small white dog, which survived the attack but required veterinary treatment. 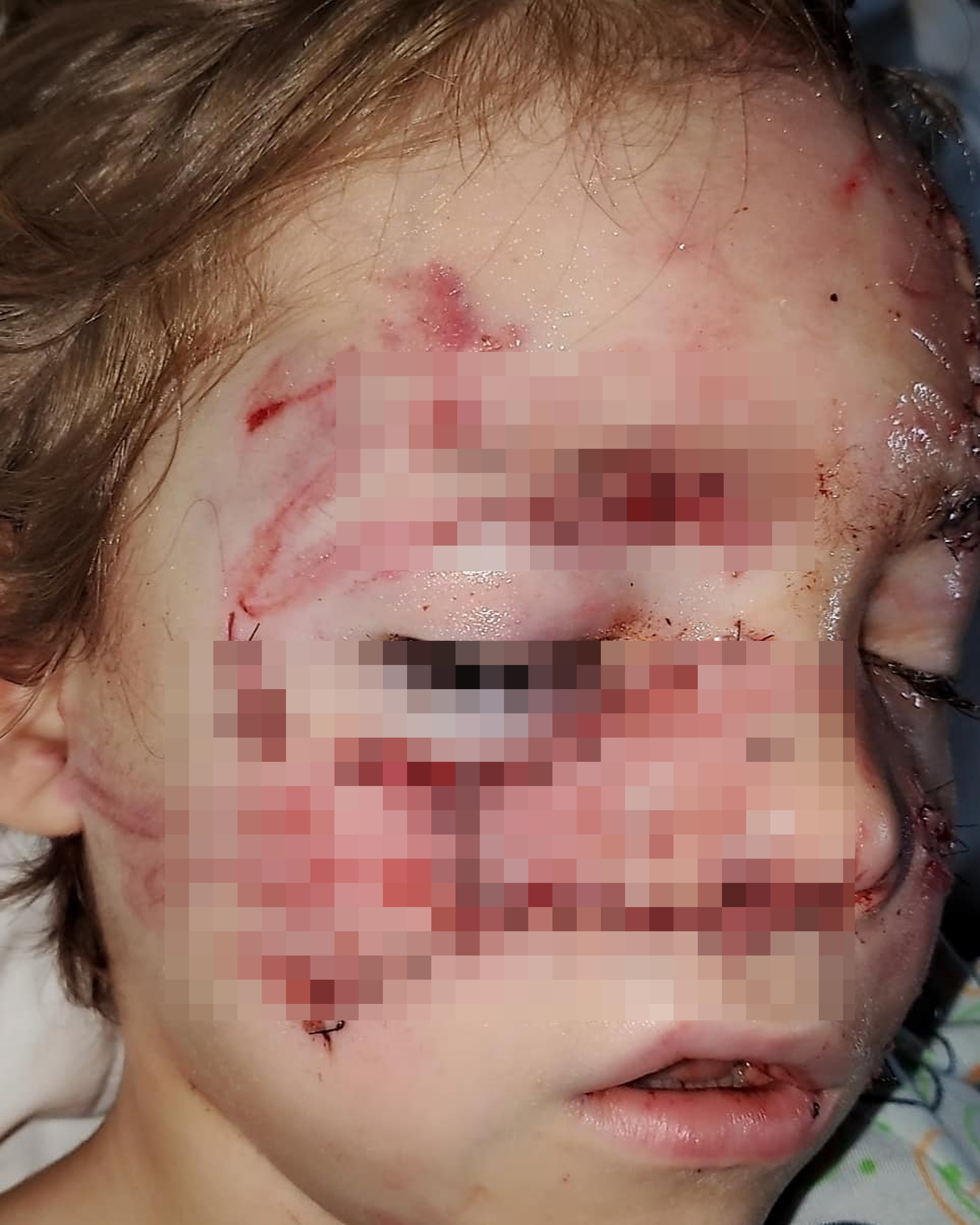 A six-year-old suffered life-changing injuries in April when he was mauled by their “lovable” pet dog, Chaos, five, at his grandma's home in Schoolcraft, Michigan.

The pet dog attacked Camdon’s face in a fit of rage after he got up to get a snack and had to be pulled off the boy by his hero grandma, who was alerted by Camdon’s screams while in the bathroom.

The schoolboy had to undergo plastic surgery to reconstruct his face and has been left with permanent scarring following the horrific attack.

Paramedics said it was the worst thing they had ever seen.

Mom Tristin, who now lives in Plainwell, Michigan, is warning other parents not to leave pet dogs unsupervised with children.

The five-year-old pitbull was ordered to be put down by police. 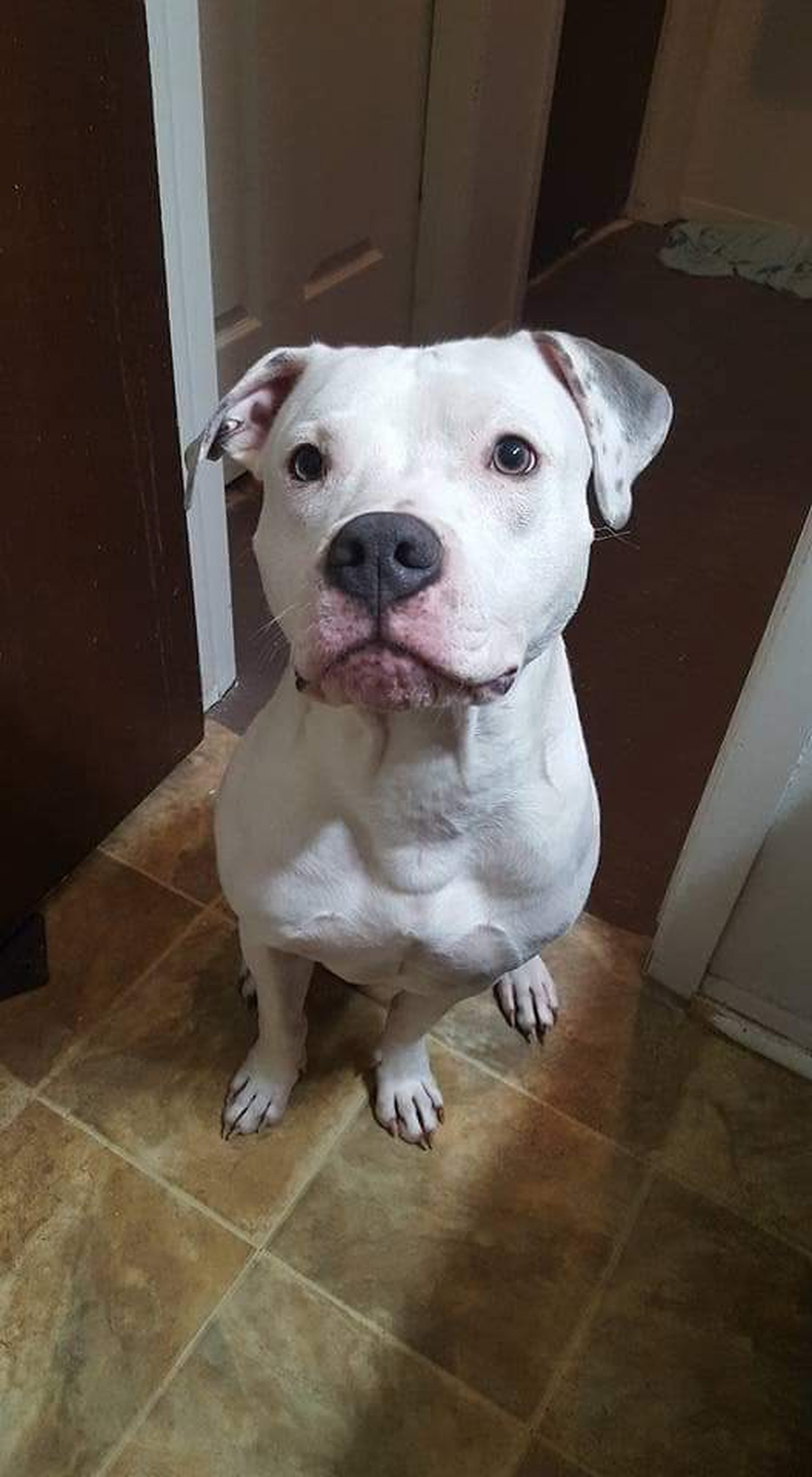 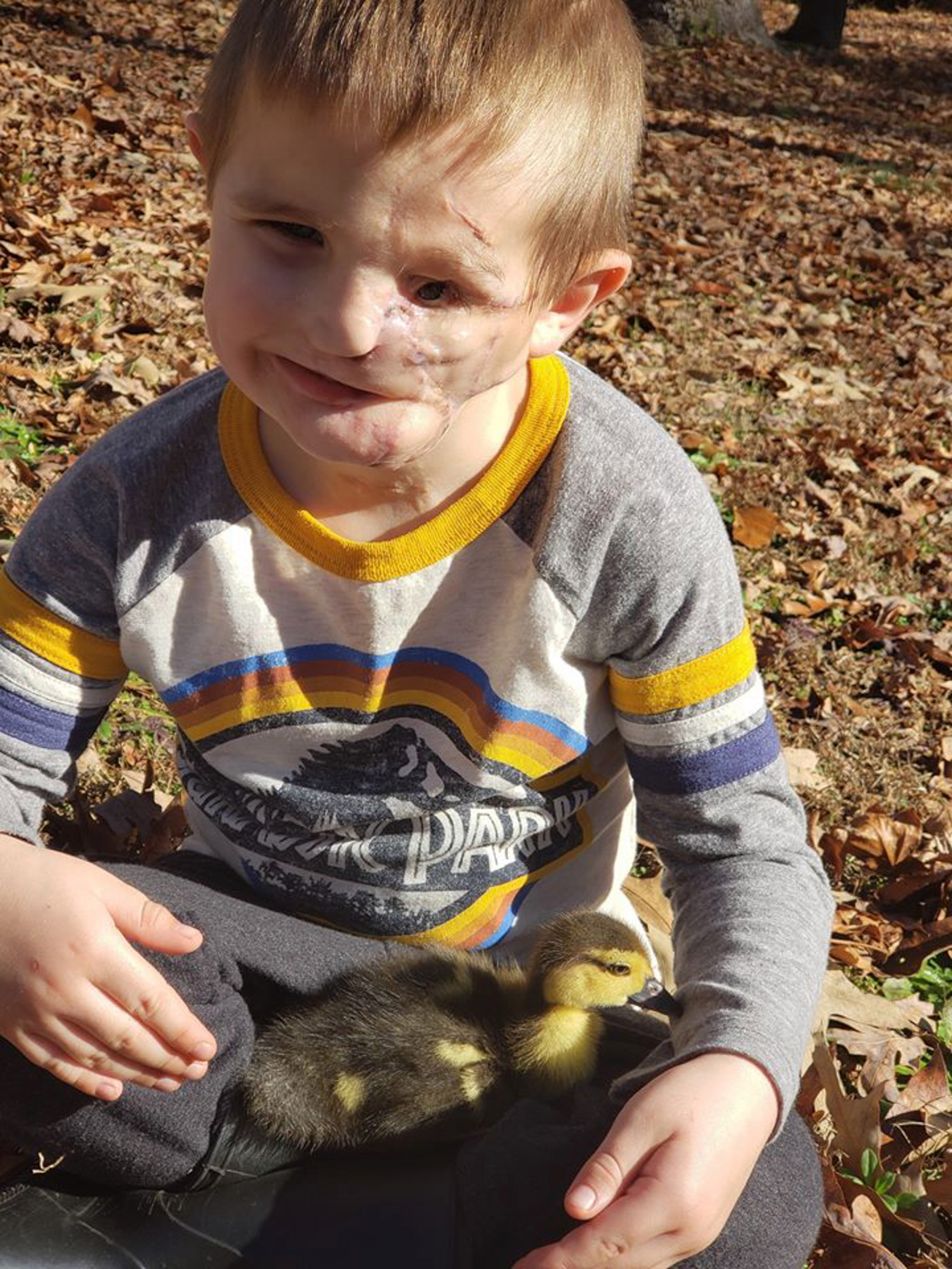 The five-year-old had half of his face ripped off by two jealous rottweilers on a Thanksgiving trip in 2014 that ended in tragedy.

Ryder and his mum were visiting a family friend's house when Ryder was attacked by two rottweilers.

It left him permanently disfigured as seen in pictures released by his mother.

It took 50 surgeries to reconstruct his face.

The traumatised tot, only 21 months old when he was mauled by the 100-pound dogs, lost the whole of his right cheek, the bottom of his eyelid and 75 per cent of his lip.

His teeth were crushed and he suffered a broken arm and a puncture in his right lung.

Distraught mum Brittany, 31, told how strangers in the street still make nasty comments about the youngster and he's even been dubbed a “monster” in the playground.

Medics warned Brittany to prepare for the worst but despite the doctor's expectations, Ryder defied the odds, learning to eat and drink, attending preschool and kindergarten. 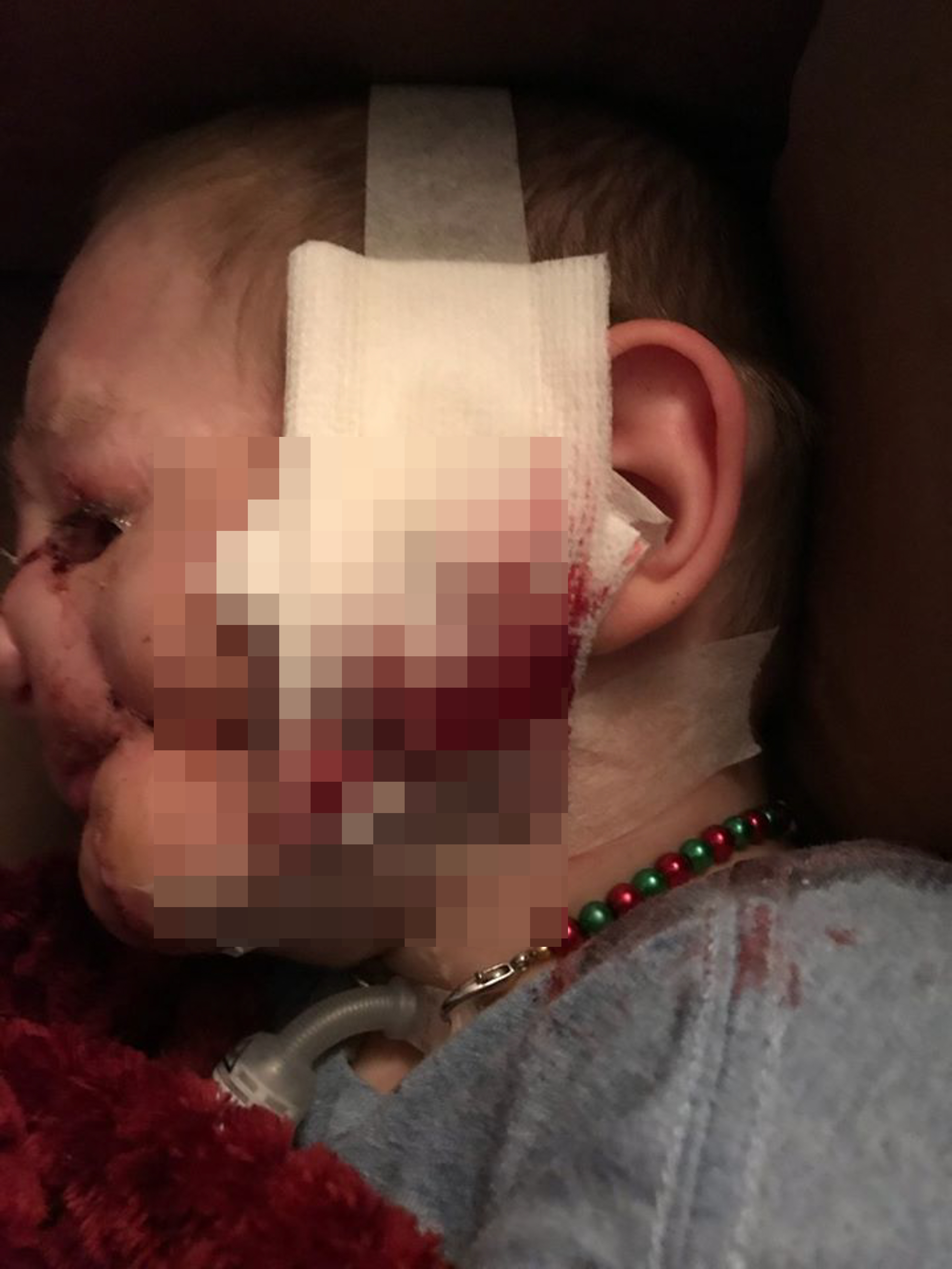 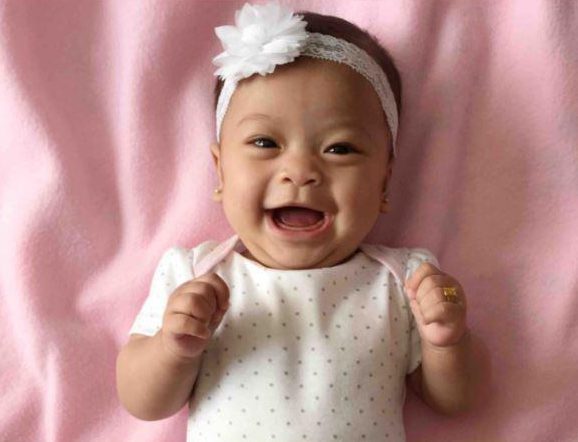 Six-month-old Kamiko Dao Tsuda-Saelee was playing in a baby walker in her family’s home in Las Vegas when thefamily pit bull suddenly attacked her in May 2017.

Her hero mother, Layla Tsuda, intervened and managed to pull the mutt off, but she had already suffered serious blunt force trauma to the head, KTNV reports.

The six-month-old, originally from Hawaii, was rushed to hospital but succumbed to her injuries shortly afterwards.

The youngster’s mum told KHON she had gone to the bathroom for a minute, and found the family dog attacking her daughter upon her return.

In a statement, the devastated mum said: “I have no words to explain my pain.”

She added the dog, named Mana, had lived with the family for nine years, and had not bitten anyone in that time.

The pooch was a beloved family pet before the horror attack.

Clark County Animal Control removed the dog a few hours following the incident after the distraught family surrendered him – and he was put to sleep. 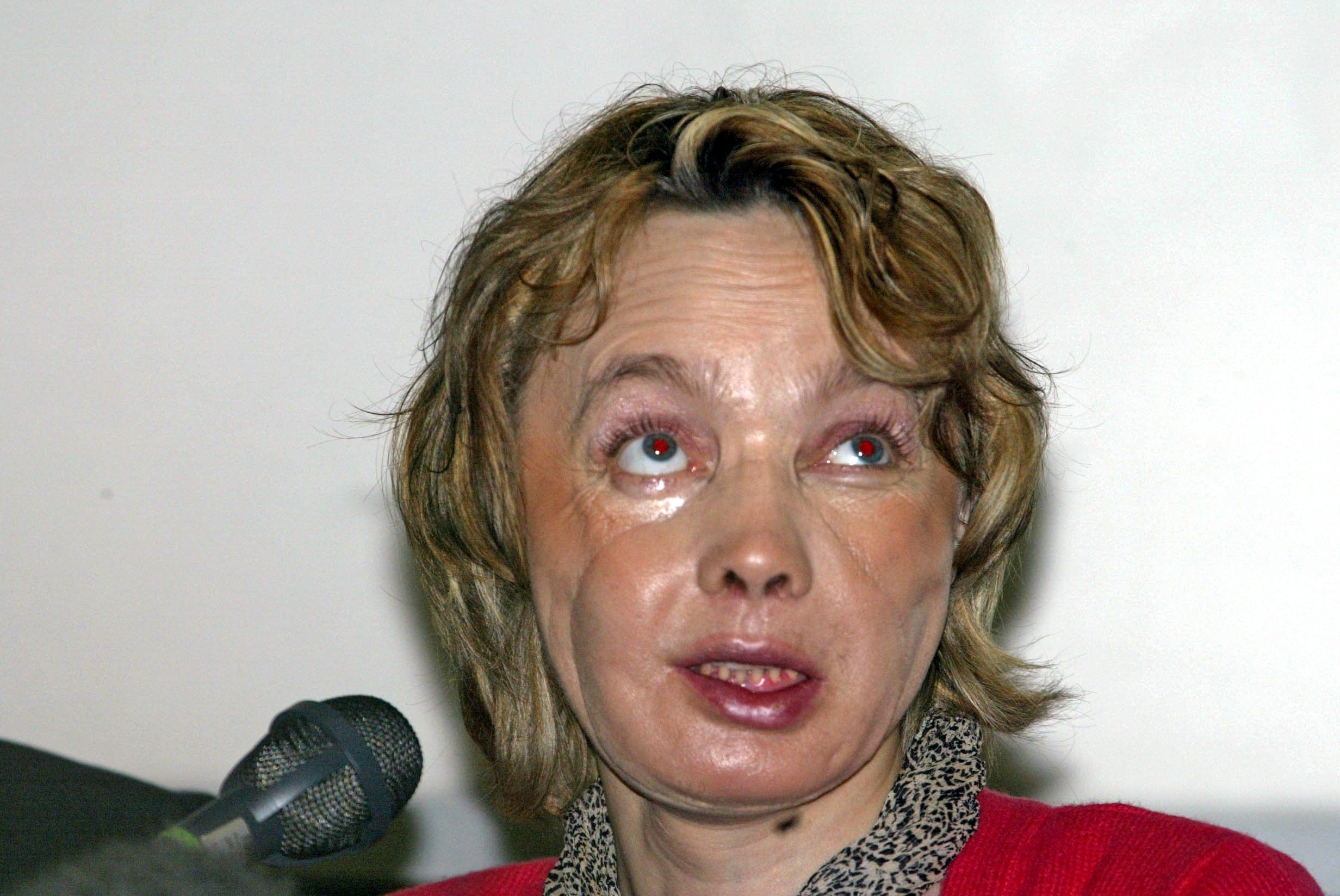 Isabelle Dinoire was the first person to undergo a partial face transplant, after her Labrador retriever crossbreed mauled her in May 2005.

After taking an overdose of sleeping pills, the French woman awoke lying beside a pool of blood, with her pet Labrador at her side.

The canine had apparently found her unconscious, and as it tried to rouse her he gnawed away at her face.

When she then tried to light up a cigarette, Isabelle realised her facial features were missing.

The injuries to her mouth, nose and chin were so extreme that doctors ruled out a routine face reconstruction.

But instead, they proposed a ground-breaking face transplant.

In 2016, Ms Dinoire, 49, succumbed to two types of cancer after a decade of taking powerful drugs to suppress her immune system.

But it was found her tumour was not caused by the medicines. 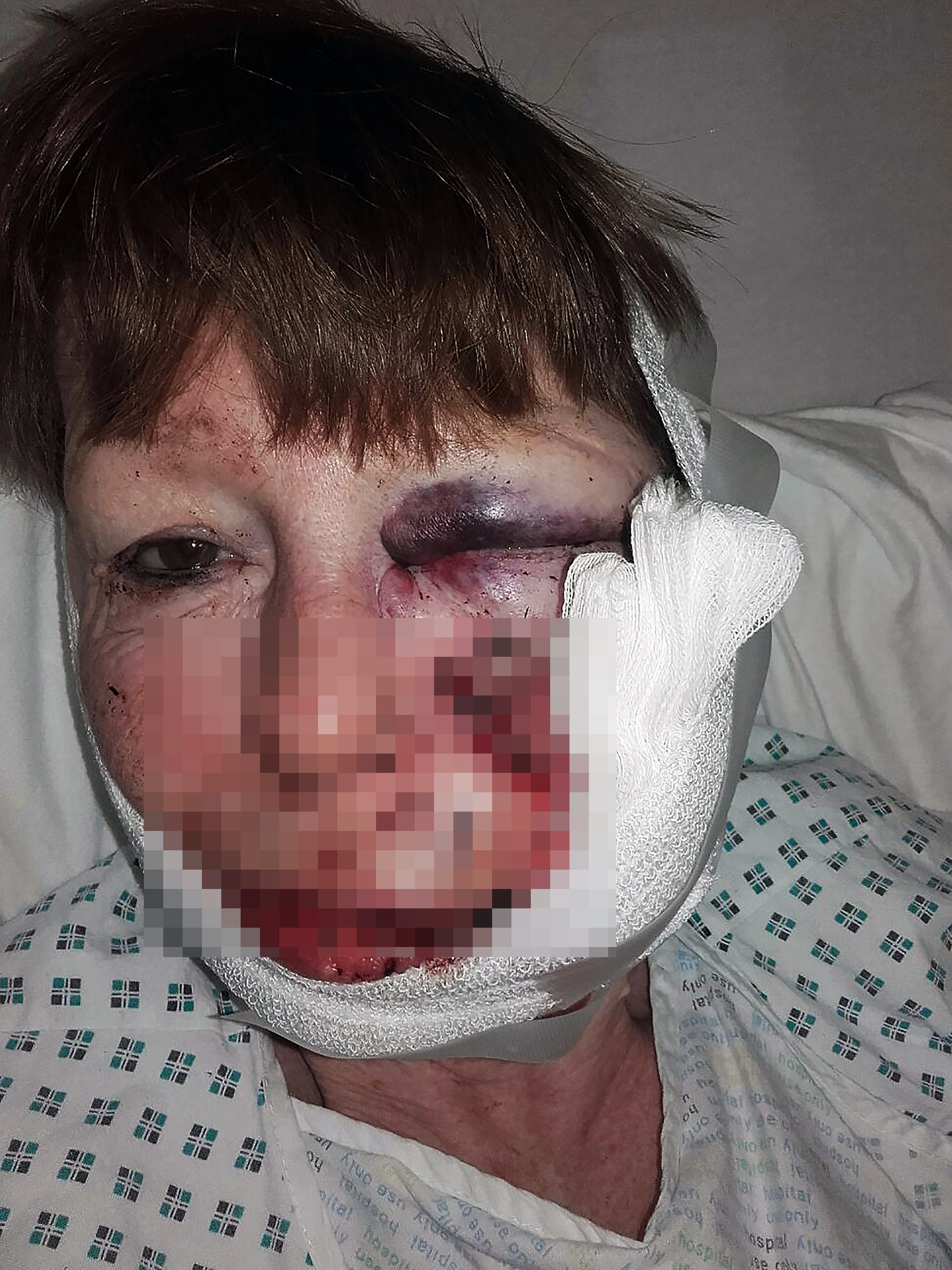 In 2016 the 61-year-old, suffered horrific scars after her neighbour's powerful Japanese Akita clamped its jaws on her face at a funeral wake.

Surgeons lost count of how many stitches they used to sew her cheek, lips and ear together after the mauling weeks before her 60th birthday in July 2016.

She has had to move home to avoid the dog owner and revealed she is so traumatised she is afraid to go out alone.

Sylvia told the Daily Record: “I feel like everybody stares at me everywhere I go.

“In the cold, my skin flares up, it goes purple and then you can see the scars. It stings in bad weather and I’ve lost sensation in parts of my face.

“I have to drink through a straw — even tea and coffee. I was always out on the town. Now I never leave the flat on my own."

Leeanne McHugh, then 36, and Patrick Maher, then 46, were each jailed for 12 months for being in charge of a dangerously out of control dog.