The state government is to announce the successful bidder soon, and two sources with knowledge of the selection process – who were not authorised to comment publicly – told The Age the Linfox-backed Avalon proposal was unlikely to be chosen.

Leaks of COVID-19 from quarantine hotels have driven Victoria’s plans for a cabin-style facility similar to the one at Howard Springs near Darwin, and the nation’s latest lockdown in Perth has again highlighted the risks of the hotel system. 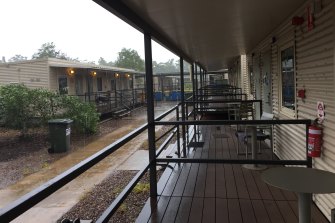 Victoria is planning to build a facility similar to Howard Springs.Credit:Louise Radcliffe-Smith

One proposal still being considered, according to three sources, is a western suburbs site at Cherry Creek, where the government owns land and is building a youth prison. That site is near Werribee and about 20 minutes’ drive from Avalon, meaning flights could still arrive there if the government chose Cherry Creek.

Avalon was considered the frontrunner after Premier Daniel Andrews said on February 16 that “it’s just a matter of how big it is and the more precise details of where, but Avalon and Melbourne airports are standout candidates”. 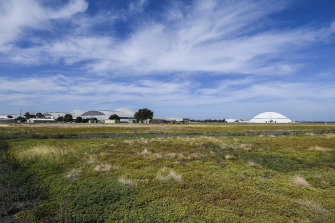 Avalon Airport is no longer being considered, sources have said.Credit:Joe Armao

The Morrison government has in recent days resisted criticism from Western Australia’s Premier Mark McGowan, who said Commonwealth sites should be used to house international travellers instead of hotels, which he believes are prone to spawning outbreaks.

WA was to lift its three-day lockdown at midnight on Monday. Almost every state has imposed stay-at-home orders after COVID-19 jumped from guests to quarantine workers and seeped into the community, prompting questions about hotel quarantine’s viability.

Australian Medical Association national president Omar Khorshid told The Age on Friday he had concerns about infection control in quarantine hotels. “[It] was always a short-term measure and we’ve been calling for a while now for governments to consider longer-term measures,” he said.

The government, led by the Department of Premier and Cabinet, has been tight-lipped in its communication with bidders. Ministers have been weighing up the environmental impacts of each proposal and determining whether the prospective sites are located on culturally significant land. 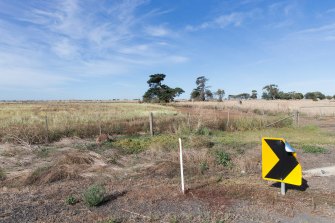 The Cherry Creek site – seen here in 2017 – could host the quarantine facility.Credit:Paul Jeffers

The Andrews government announced the new youth prison in 2017 amid bouts of violence at the Parkville youth detention centre that were latched onto by the law and order-focused opposition. The government originally planned to build the new prison quite close to homes in Werribee South but moved the location to the less dense Cherry Creek after community blow-back.

The prison, which will cost hundreds of millions of dollars, is set to open in 2022 and is being built by Chinese-owned construction behemoth John Holland. Cherry Creek is viewed favourably as a site for the quarantine facility, as infrastructure is already being built for the detention centre.

Victoria, which has put temporary pauses on international flights three times due to outbreaks, now receives 1000 people each week.

The state Liberal opposition has cast doubt on the value of a long-term quarantine facility, but the slowness of the vaccine rollout has led scientific experts and politicians to speculate that quarantine, especially for people arriving from COVID-19 hotspots, may be necessary into next year.

They have also repeatedly questioned Mr Andrews, who is on leave due to a back injury, about whether he would recuse himself from any deliberations due to his personal relationship with the Fox family, which part-owns Avalon Airport.

The Premier has a close personal relationship with Lindsay Fox and his son, Andrew Fox, who is responsible for Linfox’s property arm. Mr Andrews sometimes spends time with the Foxes at their Portsea home.

The Premier has been on leave since his injury on March 9, meaning the pointy end of cabinet’s deliberations have happened in his absence. Even so, if the government had selected Avalon it would probably have faced attacks from the opposition about what could have been characterised as a special deal for the Fox family.

The government also plans to use the facility for future pandemics or emergency situations such as bushfires, and a final business case will evaluate the potential for a centre that could be moved to other locations.

The facility may include single-storey, self-contained accommodation for a range of family sizes, with separate ventilation systems and easily cleanable surfaces.

The government wants the site to be close to an international airport and a public hospital, in line with recommendations from the Coate inquiry into hotel quarantine.